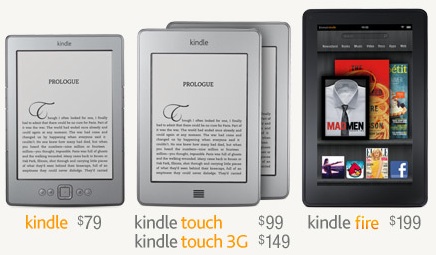 Today Amazon unveiled their newest Kindle versions (what would be considered the Kindle 4), and is calling them simply the “Kindle” and the “Kindle Touch” for the touchscreen version. Both keep the 6″ e-Ink Pearl screen of their predecessors, and both lose the physical keyboard (replacing them with on-screen keyboards). The big news is probably the price: the Kindle now starts at just $79. Considering that people have predicted for a while that e-reader sales would explode when they got below $100, $79 (for the Kindle) and $99 (for the Kindle Touch) is pretty big news.

Of note, the new “default” price is the price with “special offers,” which means you get ads as screensavers and at the bottom of your home screen (but not during reading). I discuss it further here, but the ad-supported versions have become Amazon’s most popular, and some of the ads are even legitimately great deals (like a $20 Amazon gift card for $10). The non-ad-supported versions are $30 or $40 more each.

While I am not as convinced of the merits of a touchscreen as most people seem to be, what jumps out at me is the $79 Kindle: you get the same 6″ e-Ink Pearl screen, access to Amazon’s world-leading e-bookstore, all Kindles now have access to library e-book lending, and it weighs just under 6 ounces. That is a very impressive bang for the buck, and the light weight makes it pretty perfect for a lot of users. The lack of a physical keyboard mainly only comes into play for those who like to take lots of notes or surf the web a lot; for the few times you might need the keyboard during normal use (to create and name a new “collection,” for example), I’d imagine the 5-way controller and on-screen keyboard will be fine. At the bottom of the Kindle (Kindle 4? New Kindle? Kindle Sans Keyboard & Sans Touch?) is the 5-way controller from the previous Kindle, as well as home, back, keyboard, and menu buttons. It also retains the narrow page turn buttons on each side, which I like in my Kindle 3.

Of course, if you like touchscreens, for just $20 more, you can get the Kindle Touch for $99. Like Sony and B&N, the Kindle Touch uses a series of infrared beams to detect your fingers instead of an extra touchscreen layer (which would somewhat muddle the screen beneath). The Kindle Touch (and Kindle Touch 3G, which looks the same on the outside) has no physical buttons on the front or the sides — it seems everything is now accomplished through the touchscreen. Turning pages requires a swipe or tap on the side of the screen you want (left for back, right for forward).

Both models are small and light, with the non-touchscreen Kindle an ounce or two lighter and slightly smaller (6.5″ x 4.5″ x 0.34″ vs. 6.8″ x 4.7″ x 0.4″ for the Kindle Touch). The $79 Kindle also has less battery life (listed at 1 month instead of 2) and storage space (2 GB instead of 4 GB); however, both should be more than enough for most users. The $79 Kindle doesn’t include speakers (so no text-to-speech). Both new models incorporate a trick used on the new Nook Touch: it only refreshes the e-Ink screen (which causes a brief black-on-white flash) every 6 page turns instead of each time. E-Ink flash never bothered me, but some people might prefer the new system.

My analysis? Well, I haven’t been able to physically try one yet, but considering they have the same screen as my current Kindle 3 (sorry, I mean “Kindle Keyboard”), I think I can make some good guesses. I think the $79 Kindle 4 is going to be very popular this holiday season, because I think it gives most people everything they really need in an e-book reader, and at under 6 ounces.

On the other hand, I’m not quite as impressed by the Kindle Touch versions. For people who like touchscreens, they will be great, but I’m just not on the touchscreen bandwagon. And, to compare apples to apples, the prices are really about the same as the versions they’re replacing when you compare ad-supported vs. ad-supported models; Amazon is (probably wisely) just focusing more on the ad-supported price instead of what used to be the “regular” non-ad-supported price. On the other hand, getting an e-reader from the industry leader, with library lending, Wi-Fi, and a touchscreen for under $100 is still a heck of a deal.

A couple of final notes for now (I’m sure I will have more soon about these new models): back in January, I advised readers that the next-generation Kindle would not arrive for “at least 6 months, probably closer to a year (maybe just before Xmas).” That was just over 8 months ago. The $79 Kindle is available now, while the Kindle Touch version should start shipping November 21, pretty much just before Xmas. I also predicted that color e-Ink or Mirasol was probably further away than that.

Speaking of color, today Amazon also announced the Kindle Fire, the long-anticipated “Kindle Tablet,” which sports a 7″ color LCD (not e-Ink) screen and is more of a direct competitor to the B&N Nook Color, and a smaller, cheaper alternative to Apple’s iPad. At just $199 and 14.6 ounces, it will read e-books, play movies (from Amazon’s video on demand service), play music (from Amazon’s MP3 service), and run apps and games (from Amazon’s Android App Store). I will have a separate post about the Kindle Fire shortly. (UPDATE: As promised, here it is.)