I have decided to release a short story I wrote several years ago, entitled The Glass Dragon, for free on my website. This 5,800-word short story explores the topic of time travel, and living a life of What Ifs.

A story of the convoluted consequences of a near-future world of time travel gone awry. Can the newly-introduced TimeCops restore order? Or will they be erased before they ever existed?

While I’m currently providing this to my readers for free, I’d ask that you please don’t re-sell it or re-post it elsewhere. Please feel free to share the link to the download page, where anyone can download it for free. Thank you, and I’d love to hear any comments you have after reading it below!

Get free e-books at B&N stores

In addition to Barnes & Noble’s recent promotion offering a free $50 gift card with the purchase of a Nook e-book reader, they’re now offering a pair of new promotions: a different free e-book every week, and a free “tall” (which is Starbucks lingo for “small”) hot or iced coffee — just for showing them that you’re reading an e-book on your Nook or Barnes & Noble app for the PC, Mac, Blackberry, iPhone, iPod Touch, or iPad.

For the past few weeks, B&N has been offering a different free e-book each week. To qualify, just bring in your Nook or laptop / phone running the free B&N e-reader app. Show it to any B&N employee and they’ll give you a voucher to download a free e-book (which you can do right there in the store with their free Wi-Fi connection). This week’s book is Home Safe by Elizabeth Berg, and next week’s book (starting June 14) is The Long Tail by Chris Anderson. 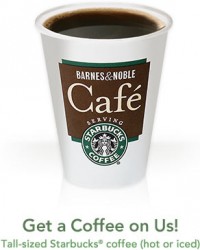 Free coffee too from B&N Cafe!

While you’re there, head over to the B&N Cafe (that looks like a Starbucks, but is technically not) and show them that same Nook or device running the B&N app, and they’ll hook you up with a free tall coffee. The fine print says you get a non-customized hot or iced coffee, and can only redeem it once. They also point out that this only works at B&N Cafes, not at Starbucks, or at any Starbucks Cafe inside a B&N store. Confusing? Yeah, I didn’t even know most cafes inside B&N stores were “B&N Cafes,” I just thought they were all Starbucks. So you may want to call and check your local B&N before you head over.

Anyway, that’s three pretty incredible deals from Barnes & Noble. A free $50 gift card is nothing to sneeze at, and the other two deals are even better since you don’t have to buy anything to qualify. You can just download the free B&N app to your laptop or phone, bring it in, and get a completely free e-book and free coffee. It’s a bold move by B&N to (a) get people into e-books and (b) drive foot traffic to their stores where they hope you browse and buy other stuff. It’s interesting that B&N is trying to increase business at its existing retail locations (that sell mostly paper books but increasingly sell gifts, cards, and accessories as well), but is also firmly committed to the future with the Nook and focus on e-books. I hope these moves pay off for them, because they seem well thought out, forward-thinking, and very customer-friendly.

So, download the free B&N e-reader app for your favorite portable device, maybe pick up an inexpensive e-book or two (this one is just $2.99, and get another free e-book and some free coffee on your next visit to a Barnes & Noble store.

No such thing as a free lunch

The enticing title of this post refers to a phrase created to distinguish between two meanings of the word “free.” There is “free as in beer,” meaning free of charge, and sometimes referred to as “gratis” (from the Latin). This is contrasted with “free as in speech,” meaning free from restriction or censorship, and also referred to as “libre.” (As one who loves language, the conflation of two separate ideas into one word strikes me as an odd quirk and a fascinating bit of inefficiency in English, but I digress.)

Sadly, we’re not talking about beer today. What we’re talking about is the commonly-held idea that information on the Internet “should” be free — free as in beer. (Most of us reading this from outside the halls of the capitol at Pyongyang would agree that most information and news should be libre: free as in speech.) Visit any forum or online discussion about digital content (such as e-books, TV shows like Hulu, online newspapers, etc.), and dozens of people will tell you that information “wants” to be free, “needs” to be free, or “should” be free on the Internet. They will point out that hosting a website and transmitting data across the globe is a relatively trivial expense — and they’re right.

What many fail to realize is that producing quality content (whether it’s a well-written and well-edited novel or a well-researched news story) takes plenty of human labor, and that content is worth more than just the cost of the paper and ink to print it. Let’s look at newspapers for a moment. Newspapers everywhere are struggling. For about a decade now, most newspapers have spent a great deal of time, money, and effort developing slick websites to bring you all the news from their print versions — with additional perks like videos, more color pictures, and discussion forums — in order to enable their customers to stop paying for newspaper subscriptions. (Sure, you could argue this wasn’t the best business model, but hindsight is 20/20.) The idea was to make enough money on online advertising to recoup the lost subscription revenue plus pay for the additional web design and hosting costs they incur.

That idea has failed. Ad revenue is not enough to keep newspapers running right now. Internet advertising is just not very effective anymore, and advertisers are paying less and less per impression (how many of us totally ignore web banners and block pop-up windows?). Newspapers are taking big losses, laying off editors and reporters (which reduces the quality), and going out of business.

Of course, it’s a vicious cycle. Newspapers lose money, reduce the pay of journalists, lay off editors, stop sending reporters on fact-finding missions, and the quality of their writing goes down to the point that many are just regurgitating articles from the Associated Press — which we can get for free at dozens of places online, so why would I pay for access to The Miami Herald’s website? Now that newspapers have trained Internet users that information should be free (as in beer), it is proving very difficult to convince anyone to pay for online or digital content. Especially so long as other avenues keep giving it away for free. (Note that the continued chorus of Internet users in support of the “free” model is based on the fact that 95% of Internet users are content consumers and maybe 5% are content producers trying to pay rent. It’s kinda like having 9 wolves and a sheep vote on what’s for dinner.)

The problem is that quality, well-researched, neutral, accurate information is worth paying for. Good writing, good editing, investigative journalism, flying reporters to locations to uncover stories — that’s worth paying for. What some random blogger thinks about something he may or may not know anything about — that should be free. 🙂

On the other hand, the Wall Street Journal (to pick one example) seems to be making the same mistake LOTS of digital media (news, books, music, movies, etc.) producers are: overcharging. Customers know that it costs less to stream a TV show than create, package, and ship a DVD. It costs less to email an e-book than to print and ship a hardcover. And the WSJ’s costs go down if they can get rid of their printing presses and stop buying paper and ink by the ton.

Digital media producers are very slow in understanding that the marginal cost of selling 1 more digital download is close to zero. So it’s better to sell 5x as many (e-books, subscriptions, streaming movies) at 1/2 the cost. It’s a win-win. But, when I can get a DVD for $1 from Redbox, I’m not gonna pay $5 to stream it online. When the library is free and bargain books are a few bucks, I won’t pay over $10 for fiction e-books. When a print mag is $2 an issue, why am I paying $5 for a digital download? And why does a $3.99/week iPad WSJ subscription cost more than a $2.99/week print newspaper (that takes paper and ink and trucks and delivery people)? People aren’t stupid. I like my iPad, but I didn’t all of a sudden forget basic math.

There is a middle ground: free is an unsustainable model if you want quality content, and overcharging will kill the model just as quickly. Higher volume at lower prices is the great opportunity of digital content.

Now, if only things worked the same way for beer ….