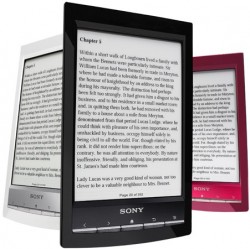 Sony recently announced a new e-reader with both a touchscreen and Wi-Fi connectivity. At just 5.93 ounces, Sony is touting it as the world’s lightest touchscreen e-reader. Compared to the Kindle’s 8.5 ounces (which I find to be pleasantly light), under 6 ounces qualifies as featherlight — easily lighter than most printed books. It is also just 8.9 mm in thickness.

The PRS-T1 should be available in October for $149. Finally, Sony realizes that it can’t charge double what Amazon and B&N charge for the Kindle and Nook! Even better, they finally added Wi-Fi to an e-reader at a reasonable price.

The touchscreen on the PRS-T1 is the infrared-based touchscreen system introduced by Sony that eschews the older touchscreen layer that inhibited readability. The screen is the standard 6″ diagonal, 600 x 800 pixel, 16-level greyscale e-Ink Pearl display that should offer great contrast and readability. It runs on a heavily modified version of the Android operating system. It comes with 2 GB of space (1.3 GB usable), and also includes a MicroSD card slot for memory expansion up to 32 GB. As with earlier Sony e-readers, it reads e-books in the ePub format.

If you’re a fan of Sony products, and like the idea of a featherlight e-reader, it sounds like the new Sony is worth a look.