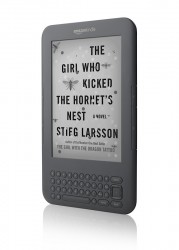 Amazon today announced the new Kindle 3, and it’s quite an improvement. The price for the 3G model remains at $189, and the new Wi-Fi only model is only $139 (narrowly edging out B&N’s new $149 Nook Wi-Fi). They should be available August 27, and both include free 2-day shipping.

The $189 3G + Wi-Fi model ads Wi-Fi connectivity to the free, lifetime 3G wireless coverage of the Kindle 1 and 2 models. Both new models have:

This is really a killer list of features. What strikes me is that they took what the Kindle was already great at, and made it even better. As the owner of a Kindle 2, I can attest that the device is already small and light enough for easy one-handed reading — it’s as light as most paperbacks. Now, it’s even smaller and lighter: only 1/3rd of an inch thick and about half a pound. And the battery life was already phenomenal — I’d get 2 or 3 weeks out of it — but a full month without recharging is absurd. The page turns were also fast enough (about 1/2 a second) so they weren’t obtrusive, but faster is even better. And the extra storage is also nice, although 2GB is more than enough for most users: not only can you hold thousands of books, but you can always back up extras on your computer and Amazon backs up all your purchases through the “cloud,” so you can delete them to free up space and can always re-download them when necessary.

They’ve also made important improvements in areas that could use them: the contrast of the screen, for example. If I had one gripe about my K2, it’s that the background looks more like the gray, newspaper-like paper of mass-market paperbacks than the clean white paper in higher-quality trade paperbacks. I haven’t seen it myself, but the new “Pearl” display is supposed to be a slightly lighter shade of gray.

Additionally, they changed around the layout and button placement a bit: mainly, they’ve redesigned the 5-way controller, added “home” and “back” buttons, removed the number keys (you now have to hit ALT + the top row buttons), and re-designed the next page and previous page buttons (supposedly making them quieter as well). There will also be three user-selectable fonts (with, of course, the existing 8 font sizes), support for Asian language fonts, and software improvements including a better web browser, text-to-speech on menu items (for better accessibility), and support for notes and the built-in dictionary with PDFs.

I think it’s also a great move to make a lower-cost model: the Kindle Wi-Fi for just $139. This was partially to compete with B&N’s $149 Nook Wi-Fi, and it makes the new Kindle 3 very affordable — it’s several times less expensive than Apple’s $499 iPad. Consider that the original Kindle was $399, and the Kindle 2 was still $259 just a few months ago, and you can see how aggressively they’ve driven the prices down. It makes the value proposition that much better, as anyone who reads more than just occasionally can almost certainly recoup the cost of the device through the fact that e-books are generally less expensive than hardcovers or paperbacks — and many great, classic e-books are free. It doesn’t take very many free and $2.99 e-books (compared to $10 paperbacks, let alone $25 hardcovers) to recoup the initial cost of the device. And the extra $50 for the 3G model seems quite reasonable, considering that it includes free, lifetime, global 3G wireless (compared to $30 a month on the iPad 3G!).

I think Amazon did a great job with this update. I wasn’t expecting so many features — just the graphite casing (ho-hum) and Pearl screen (which is nice). Now I’m a little jealous… 😉