November e-book sales increased slightly from October, to $77.3M, but continued the meandering range that may signal a plateau, or at least a noticeable slowing, of the heretofore-explosive growth of e-book sales. While sales were still up 65.9% from November 2010, that rate marks the slowest increase of the year (and last month’s 81.2% growth rate clocks in as the second-slowest of 2011). 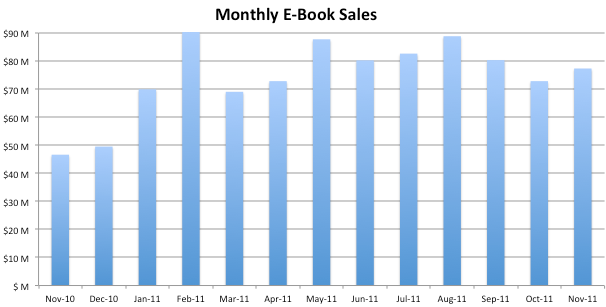 Various observers have attributed the slowdown in e-book sales growth to customers waiting until the holiday season to buy new e-readers (note that the Kindle 4 and Kindle Fire were announced September 28, 2011 but didn’t ship until November 21), or to Amazon’s inclusion of Kindle e-books in library lending programs, which began in late September.

At an 11-month total of $871.7M (or $885M or so with the more recent, slightly upwardly revised numbers), it would take a great December to hit the $1 billion mark for e-books that I predicted at the start of the year — but they will probably get pretty darn close.

The recap of the past 13 months of e-book sales:

One other interesting note: the Publisher’s Weekly press release noted that sales of adult mass-market paperbacks “all but died,” coming in at only $20.8M, less than half the figure from the previous year. This is not too surprising, since the growth of e-books is most likely to impact sales of mass-market paperbacks, as MMPs are the least expensive print offering, their release is delayed after hardcovers (as some publishers do with e-books), and most closely filled the role that e-books are starting to fill for people: day-to-day fiction reading, as opposed to hardcover cookbooks, graphic books, or bookshelf display items.