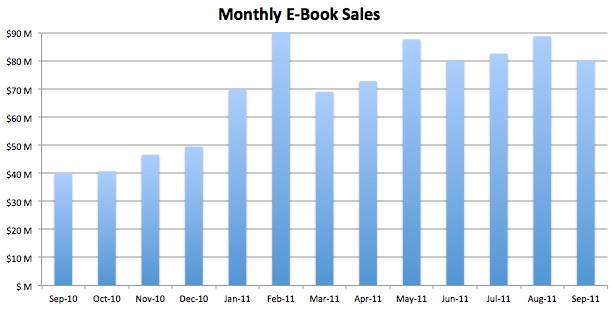 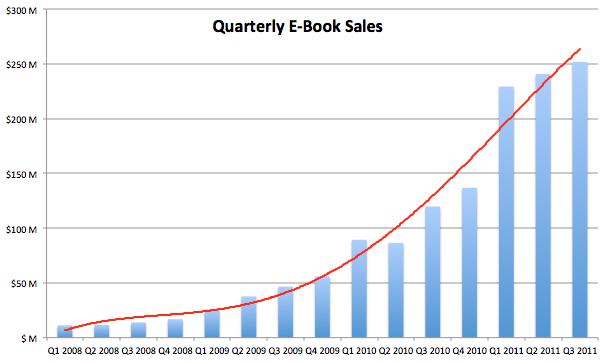 The quarterly sales of just over a quarter of a billion dollars help push e-books to $727.7M for the first 9 months of the year, an increase of 137.9% over last year, and close enough that a strong holiday push could put e-book sales at a billion dollars for the year, as I predicted after February’s sales.

While the AAP frustratingly has become more stingy with its print book sales figures, they did provide percentages that I used to estimate print book sales for the month (fortunately, I keep a spreadsheet with each month’s figures going back to last year). The percentage changes for print books, and my estimates for Sep 2011 sales:

Fairly brutal numbers across the board, with only a slight (2.1%) increase in young adult hardcover, flat adult trade paper sales, and decreases in the other categories, including a dramatic 54.3% decrease in mass-market paperback sales. People have said that mass-market paperback sales are the most susceptible to being replaced by e-book sales, since they are generally fiction novels that people read once and then discard or donate — as opposed to hardcovers that people like to display on their bookshelves. The numbers are bearing that out, as e-book sales, which just last year were below mass-market paperback, are now nearly triple. The AAP also pointed out that sales in all print trade segments were down for the 9-month period so far this year.

Based on those estimations, e-book sales accounted for 16.25% of combined print/e-book sales for the month, roughly double the 8.17% overall figure from 2010.