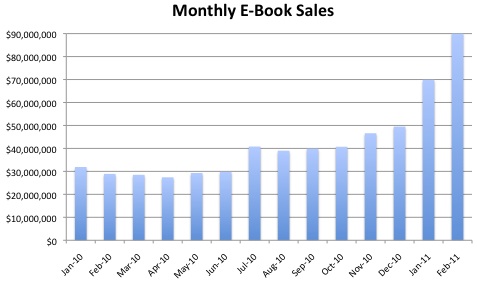 Well, that was fast.

I’ve been writing monthly updates on industry e-book sales for a year now. Recently, I predicted that January 2011 e-book sales would overtake mass-market paperbacks. They did. But even I didn’t see this coming.

E-books, which have roughly doubled or tripled in sales each of the past several years, not only blew past mass-market paperback sales, not only passed adult hardcover sales, but have now overtaken adult trade paperback sales to become the largest single category of book sales in February. The numbers:

According to the release from the Association of American Publishers: 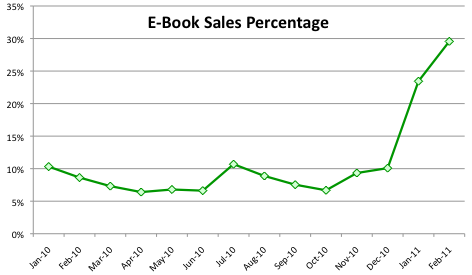 The trends are even worse for print, as e-book sales are up 202.3% (more than triple) from February of 2010, while adult trade categories are down a combined 34.4%.

A recap of the past 14 months of e-book sales:

It’s hard not to be blown away by these numbers. I expected e-book sales to increase, and predicted a nice bump after the 2010 holiday season (when millions of readers unwrapped Kindles and Nooks and Kobos and Sonys under their trees), but e-book sales for February are over triple what they were just 8 months prior, and nearly double what they were just two months before! February 2011 sales exceeded the (at the time very strong) post-holiday sales of the entire first quarter (Jan, Feb, Mar) of 2010. Amazing.