The September industry e-book sales statistics are in, and sales have remained strong, coming in very close to July and August’s strong figures. Sales increased a bit from the previous month, hitting $39,900,000 in September 2010. This is down slightly from the record $40.8M sales of July 2010, but well above the pace from the first two quarters of this year.

These numbers constitute a 158.1% increase over last September, and year-to-date e-book sales are up 188.4%. This, amidst print book sales declining 12.1% from last year.

For review, the monthly sales figures so far this year: 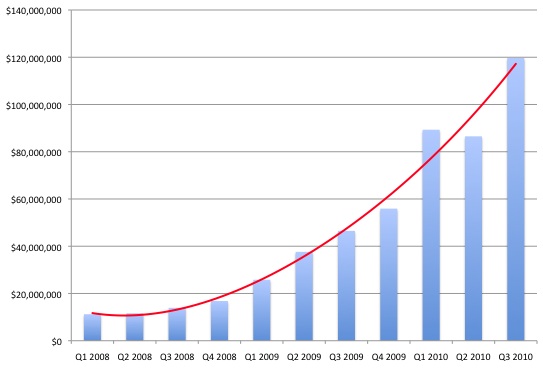 Of note: Q2 2010 marked the only decrease in quarterly e-book sales in at least the past 3 years. Back then, I wondered if the Q2 dip was caused by agency model pricing, and predicted it would be merely a “one-time dip” on an overall upward trajectory. My predictions were confirmed, and then re-confirmed by Amazon. Will it be enough data to convince publishers to abandon the agency model? Or are they hoping to slow the ascension of e-books to protect the printed book as long as they can?