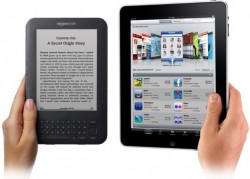 Who's more serious about reading, Amazon or Apple?

So, Apple burst onto the e-book scene almost a year ago with the release of their iPad and the iBook Store in April. But, as of 6 months ago, Apple was still only a minor player on the e-book sales scene, with Amazon dominating 75% of e-book sales and B&N with another 20% or so. Apple was hindered by (a) being late on the e-book scene, (b) the fact that reading on a backlit LCD screen just isn’t as “magical” as Apple wants you to believe, and (c) the iBook Store doesn’t have the selection of other e-book stores, with no Random House titles and only about 30,000 total in-copyright titles (compared to Amazon’s 800,000 or so). 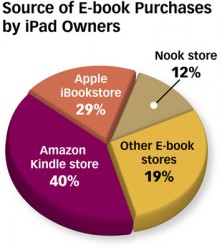 Adding insult to injury, a Codex Group survey from November 2010 found that even iPad owners were buying more e-books from Amazon (which can be read on Amazon’s Kindle for iPad app) than from the iBook Store: Amazon e-books accounted for 40% of iPad users’ purchases, while Apple e-books were 29%.

Most observers have noted that Apple’s e-book business is struggling, including The Unofficial Apple Weblog, who looked at the iBook Store 6 months after launch and found that:

I figured that this would be a good time to see just how the iBookstore has progressed. The answer, in a word: poorly … very poorly.

Or how about this review?

However, after six months of offering up downloadable text content to capable iOS devices, it appears that the once seemingly mighty contender hasn’t been able to do much more than land a few rabbit punches. Despite the iPad’s rabid popularity, neither major publishers, nor the book buying public have embraced iBooks.

After more than half a year online, Apple’s iBook Store is still only offering up approximately 60,000 titles. When held up against the 700,000 titles offered by Amazon for their Kindle reader software and hardware solutions, Cupertino’s library looks pretty weak. Did we mention that about half of the titles available as iBooks are also available from Project Gutenberg? C’mon Steve, this is embarrassing.

And that came from the staunchly pro-Apple folks over at Mac Life. Ouch.

So, did Apple take these criticisms to heart and improve the iBooks experience? Did they prove they’re serious about the e-book market? Has Apple gotten Random House to sign on? Increased their selection to at least keep up with Amazon’s rate of growth, let alone closed the gap? Improved their store navigation or implemented a recommendation engine? What have we heard from Apple about the iBook Store in the months since those less-than-glowing articles were written?

Nothing. Well, I can’t say I’m shocked, since the whole iBook Store and marketing of the iPad as a reading device never seemed sincere to me. It’s just so far inferior to a Kindle 3 as a reading device (harder on the eyes, triple the weight, far less battery life, etc.), it’s not really in the discussion for me. Add in the fact that the K3 is around 1/4th the price ($139 for Wi-Fi, $189 for free-for-life 3G), and there’s no comparison when it comes to reading.

More telling is the fact that Apple pretty much abandoned the marketing talk about the iPad as an e-reader soon after launch. I always thought that was just a marketing ploy, a way to position itself as the #1 seller in the e-reader category (a “Kindle killer”), instead of as a minor player in the much larger laptop or netbook market. And Apple hasn’t mentioned the iPad’s e-reading capabilities in a long time, they haven’t added titles, they haven’t upgraded the shopping experience at all, and they’ve made only minor updates to the iBooks app. Contrast that to Amazon, which incessantly markets their e-readers as devices focused on reading, has commercials touting their outdoor reading ability as superior to the iPad, upgrades their Kindle software and Kindle apps often, adds about 30,000 new titles every month, and even came out with the much-improved Kindle 3 in August. As a reader, you know Amazon is devoted to reading, e-books, and the Kindle. And Apple never really cared about reading to begin with, and it shows. After all, Steve Jobs dismissed the Kindle and reading in general as recently as 2008, saying that:

Did anyone really think he so dramatically changed his mind and did a complete 180 between that statement and when he made the iPad (which came out in 2010 but was probably in development even when Jobs uttered those words)? Or was “e-reader” just a convenient marketing label Apple decided to attach to a multi-purpose device designed primarily to do other things?

4 Responses to “Is Apple (iPad, iBooks) Serious About Reading?”