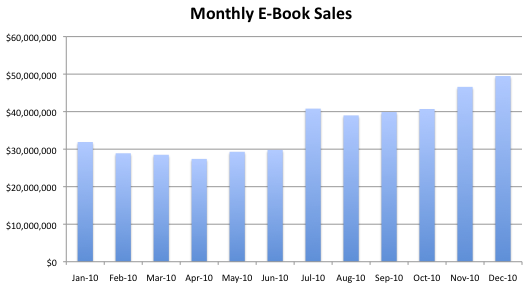 Here is a rundown of the monthly totals: 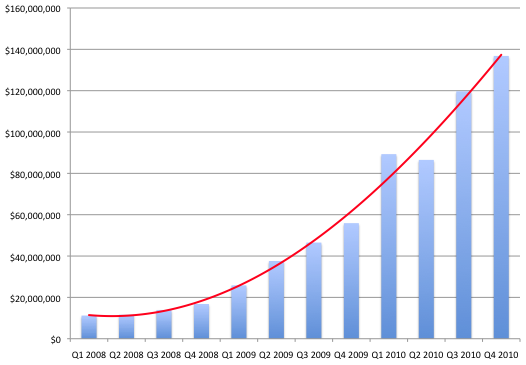 Monthly e-book sales ($49.5M) haven’t quite caught mass market paperback sales ($57.1M) yet, but they’re getting ever closer as e-book sales increase dramatically and print book sales decline from 2009 levels. Mass market paperback sales were $60.2M in October 2010, and $673.5M for 2010 in total, a decrease of 6.3% from 2009 figures ($718.9M). Back in March 2010, I was amazed that e-book sales were 53% of mass-market paperback sales; in December, they were up to 86.7%. Considering how we saw a surge in e-book sales in January 2010 (after millions of people received Kindles in late December for Christmas) and a decline in print book sales (due to snow and poor winter weather), I’m still predicting e-book sales to catch or overtake mass market print sales as soon as January 2011 (which means it would have already happened, we just haven’t gotten the statistics to confirm or deny it yet). UPDATE: January results are in, with e-books easily overtaking MMP sales.

E-books continue to increase dramatically as a percentage of total book sales.