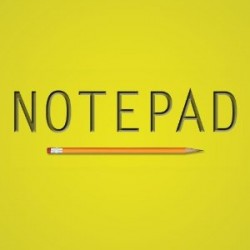 The Notepad app for Kindle

While the Kindle is designed and best-suited as an e-reader, it does have a number of other functions. For example, it can surf the Internet, read books with text-to-speech, view photos, play music, and it even has some games and other applications (called “apps”) available for it. (You can find posts about other available Kindle games & apps here.)

While these apps are undeniably cool, I was a little disappointed that the early app releases were pretty much all games, with a lack of productivity tools. (True, many of the games are word-related games, but still.) So I was pleased to see the release of a Notepad app for the Kindle, a program that will allow you to use your Kindle to type, read, and store quick notes (think grocery lists, phone numbers, to-do lists, or a quick scene for your next book that just popped into your head).

The Notepad app is just $0.99, and has stellar reviews: a near-unanimous 5-star average on 34 Amazon reviews so far. It boasts quick, simple note-taking, auto-saving of notes, adjustable font sizes, notes are saved in .TXT format for export to your computer, and a search function across multiple notes. It’s definitely worth checking out if you’d like to add note-taking functionality to your Kindle for a buck.

2 Responses to “Notepad App For Kindle”