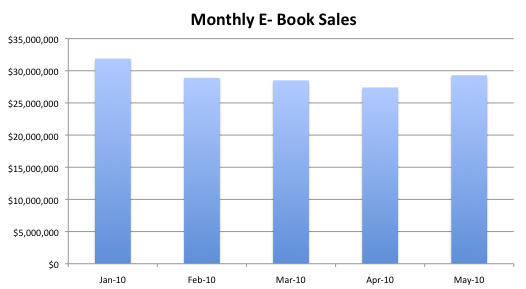 The most interesting tidbit is that, at this time last year, e-books comprised 2.89% of all trade book sales. This year so far, they’ve almost tripled, up to 8.48%. That’s not only a huge jump, but we’re really starting to approach very significant percentages (to put that in perspective, New York & Massachusetts combined account for 8.42% of the U.S. population). Some popular books are seeing even higher numbers — e-books accounted for almost 30% of the first-week sales of the #1 NYT Bestseller The Girl Who Kicked The Hornet’s Nest. Those numbers are even more impressive when you consider they’re measuring dollar figures, and e-books generally cost less than paper books, so e-books’ percentage of total copies sold would be even higher.

The monthly e-book sales numbers so far this year:

I was surprised to see even the small dips in March and April, but May appears to be back on the upswing. Perhaps e-book sales are stronger over the winter when people would rather curl up with a good e-book than brave the snow to head to a bookstore. But, for comparison, the first 5 months of 2010 total $146M, whereas the total for all 12 months of 2008 was only $56.5M.