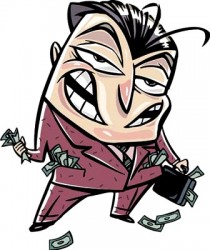 Excuse the off-topic post, but hopefully some of you will find it helpful. I’ve seen too many examples recently of false advertising, misleading claims, and outright scams. I hate to see anyone get ripped off, but that goes double for my readers. Here are some examples of people getting ripped off every day, and how you can avoid it:

OK, this one just makes me sick. Remember AOL? The old Internet company famous for sending out trial CDs by the truckload and for making it impossible to cancel their dial-up Internet service? Well, broadband Internet passed them by, but they still have an old user base, many of which still use their @aol.com email addresses. However, 75% of the people still signed up with AOL at $24.99 a month (4 million of them) keep it just for the email, and don’t use their dial-up service at all, since they’re already paying for much faster broadband service. The nauseating part? You can keep your AOL email address for free and cancel the dial-up service you never use. One phone call could save 4 million people $300 a year. That’s $1.2 billion wasted. Ugh.

Lots of people apparently still fall for these forwarded emails and spam. Look, Bill Gates is not going to send you $1,000 for each person you forward that email to, you will not have 7 years of bad luck if you fail to forward it, and that unbelievable photo is just Photoshopped. Aside from wasting time and annoying the people you’re sending them to, these chain emails can contain viruses (which are often attached to emails saying “please forward me to as many people as possible so I can spread!”), or be used by spammers to harvest all those email addresses that are quoted as part of the chain. Just because something is in “print,” does not mean it’s remotely accurate, so please at least check it out at the debunking site snopes.com before hitting the forward button — at least 99% of these chain emails are utterly fake. Even worse, if you believe these annoying emails, you’re more likely to believe the really dangerous email spam, the ones that claim someone in Africa wants you to help him get $50 million into the country, or that some magic pill will cure all that ails you. Just hit delete.

Do you have a container of Tic-Tacs around? Go grab it, please. (I’ll wait.) OK, check out how much sugar those Tic-Tacs have: 0g. Very cool, they’re sugar-free! But wait … look a little closer. The serving size is 0.49 grams. Hm, I don’t think that number is random. Now look a little closer at the amount of sugar. Where it says “0g,” there’s a little triangle asterisk thing. Look at the bottom and it says “less than 0.5g.” OK, so they rounded it down to zero. But wait, the serving size (one tic-tac) is only 0.49g, so even if the thing was 100% pure sugar, that’s still less than 0.5g, and is therefore rounded down to zero. In other words, they could label a bag of pure sugar the exact same way, and “legally” call it “sugar free,” just by screwing with the serving size. And our great Food & Drug Administration allows companies to label food like this. Thanks for looking out for us, FDA! Does anyone doubt that whoever makes Tic-Tacs funds some political action committee or lobbyist who gave some nice campaign contribution to some Senator on the FDA oversight committee? Legalized corruption, you gotta love it. The takeaway: either read those food labels very closely, or just ignore them altogether.

This is getting really bad on the Internet. As people start to ignore online ads, the advertisers are getting sneakier, crossing the line from scintillating ad copy (that perhaps exaggerates just a tad) to outright bald-faced lies and scams. One of my favorite recent examples are these ads for “news stories” about acai berries. One recent ad claims to be from “Health 5 News,” and takes you to a page that looks like a news article. It comes complete with a picture of a (completely fictional) news reporter, who claims she was “skeptical” of the magical claims about acai berries, and so tried it out for herself. Guess what? She loved it! She lost 30 pounds, had more energy, grew 4 inches in height, it cured her cancer, and she gained X-ray vision. Just click here to try for yourself! The only problem? The whole thing is a scam. There’s no Health 5 News, no reporter, no experiment, it’s just one big misleading ad for a product that doesn’t do any of the things they claim it does.

If you haven’t really looked at your phone bill for a while, please do. When I was a teenager, I remember looking at my parents’ home phone bill and finding three charges for $7 each per month, to rent phones. I’m talking about landline phones, not even cordless phones, that you could buy for $10 at Wal-Mart. And my parents (and millions of others) were paying $84 per year (we had 3, so it was $252 per year) for these stupid things. Man, I was mad, and I put a stop to that right away. I recently heard a similar story, of a guy who took over his grandmother’s finances when she got sick, and she had been “renting” a $10 phone, at $7 per month, for 50 years. That’s $4,200 for a $10 phone. It should be criminal. But the phone company (just like AOL, above), is not going to call you up and remind you that you’re getting royally screwed. The worst part? The guy called the phone company and told them to cancel the rental and come pick up their phone, and they just said to keep it, since it wasn’t even worth paying to have it shipped back to them. Nauseating.

You might have been with the same car insurance company for decades. And you may have an agent who claims to check around to get you the best deal every year, yet always just sends you a form letter recommending you stay with the same company. My parents (to pick on them again) were in the same situation. Yet, they made one phone call and found a different company who charged less than half the price. So, what was this agent doing for 20 years, claiming they were getting the best deal around, when one phone call would have learned they were vastly overpaying? He was cashing referral checks, that’s what. Hey, insurance agents have to get paid too, and you pay their salary (it’s important to remember this little fact when dealing with others, like financial advisors, for example). But their incentive is not to get you the best price — it’s to either get you to may more (if they get a percentage) or steer you to the company that pays them the highest referral fees. Either way, you lose. Even worse, it’s not like he pointed out that my parents (like many others) were paying for duplicative insurance they didn’t need. Car insurers love to charge you for “personal injury protection,” which is already covered by your health insurance, or roadside assistance, which you may already have through AAA or your car manufacturer (or both!). When you get hurt in a car accident and go to the hospital, you’ll pull out your health insurance card, not your car insurance card. And it’s illegal for you to get reimbursed for the same medical expenses twice (the insurers will check and they won’t both pay out), but perfectly legal for two companies to charge you twice for the same coverage. Buyer beware.

This article is getting too long, but I’ll just say this. We’ve all seen how “well” these guys planned for the future and protected their clients during the recent housing bubble and spectacular economic collapse their financial products caused. (Did you get a phone call from your advisor telling you to sell your house before the crash?) And my grandmother had some money with a big financial firm for a while, and when I took over her finances, I checked her statements. The value of her investments never seemed to go up, and her financial advisor wouldn’t say what fees she was paying, but every financial advisor I know drives a Porsche. Enough said.

Anything on HSN or QVC

You can get whatever it is for half the price somewhere else. Yes, no matter how enthusiastic the salespeople are. They recently had the gall to sell the Kindle 2 — after the Kindle 3 was already out — for $319, when a new Kindle 3 costs only $189 direct from Amazon.

Last week, I saw an example of a “book” being sold on the Amazon Kindle store, called something like “How to Find Free Games for the Kindle.” It has 9 reviews, all of them 1-star. It is two pages long. Page one is “Press Alt + Shift + M to bring up Minesweeper on your Kindle.” Page two has a link to some free games in the Amazon Kindle store. (Here you go!) That’s it. And, according to its sales rank, it’s selling 50 copies a day. I just saved you 99 cents.

I’m sure I could think of many more examples, but I’ll stop here. Hopefully it’s made you a little more skeptical about claims you see in advertisements, emails, and food labels. Also, I know it’s easy to just get into a routine, but please take a closer look at your phone bills, Internet bills, cable bills, car insurance, etc. and see if you’re overpaying for something or paying for something you don’t need.

5 Responses to “Buyer Beware! How To Avoid Getting Ripped Off”