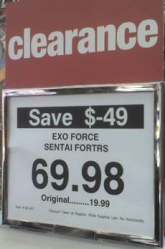 There have been numerous complaints from readers about unreasonably high e-book prices. Consumers rightfully feel that e-books, which have zero printing, storage, shipping, or returns costs, should cost less than printed books. Publishers have responded by claiming that all those costs only add up to 10% of the total cost of a book (which raises the question why we’re being charged 10x that amount, and why $2.50 hardcovers are sold for $25?). Even if we believe that 10% figure, the e-book should still cost less than the cheapest printed version (and most e-books do), no matter what kind of creative math publishers try to use.

However, a distressing number of e-books are priced at the same price as the paperback equivalents, or are often discounted from the hardcover price, but cost the same or more than the available paperback version. Also, publishers like to compare e-book prices to hardcover list prices, which almost no one pays (that $25 hardcover costs $9-$12 at Amazon, Costco, or Walmart, and even B&N offers 30% or 40% off bestsellers).

However, I recently came across an absolute abomination of pricing, one that shows just how badly the big publishers don’t get it. The book is the “authorized” sequel to Douglas Adams’ hilarious Hitchhiker’s Guide to the Galaxy. It’s called And Another Thing, by Eoin Colfer. The book was OK, but I was a little disappointed by it (true, Adams is a tough act to follow).

Anyway, check out the following price points of this book, which I bought in hardcover from a bargain bin a few months ago for just $4.48 at B&N.

Now, let me get this straight: the e-book, which you don’t have to print or ship anywhere, costs almost 50% more than the hardcover, over $4 more than the paperback, and more than triple what I paid for the hardcover in a bookstore? (By the way, the prices are similar over at B&N and elsewhere, so it’s not just Amazon that’s wonky here.) If this isn’t proof that some large publishers are trying their best to kill e-books before e-books kill them, I don’t know what could be.

My question to the publisher (Hyperion), with all due respect, is: What the hell are you thinking??

2 Responses to “What Are They Thinking?”