Looks like a big month for e-books in January 2012, although the Association of American Publishers went and changed up their system on us, growing from collecting data from 90 publishers up to 1,150. While this should give a more comprehensive and accurate picture of sales, it also makes comparisons with prior data more difficult.

Some highlights that jump out: 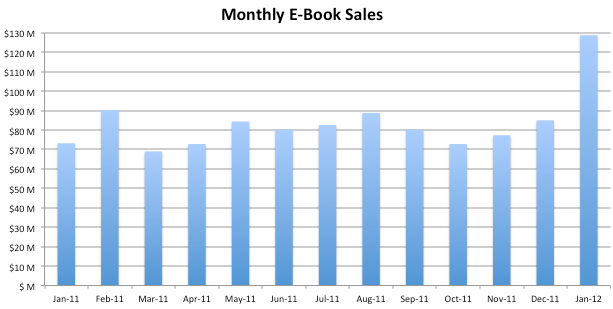 As explained above, don’t look at this chart and take the comparisons to earlier months as gospel, as the AAP’s new methodology makes month-to-month comparisons inexact. Last year, Jan 2011 sales were reported as $69.9M; this month (retroactively using the new methodology), they were adjusted upward to $73.2M. But a total of $128.8M in e-book sales is still a significant increase from any previous months, putting e-books on pace for $1.5 billion in sales for the year.