Please enjoy this interview conducted by our friends over at The Indie Spotlight.

David Derrico was born just north of Miami, Florida, and developed his appreciation for complex moral issues while receiving a degree in philosophy from the University of Florida in Gainesville. He wrote his first novel, Right Ascension, before attending law school at the University of California, Berkeley School of Law (Boalt Hall). Derrico has written two novels: Right Ascension and its sequel, Declination, and currently lives in South Florida where he is working on his next novel.

Tell us about your book:

Right Ascension and its sequel, Declination, are science fiction novels that blend action and adventure with philosophical and moral undertones. They invite readers to ponder difficult ethical dilemmas and question their own notions of fairness, honor, and the nature of justice. They ask the question: “What if humanity had to choose between honor … and our very survival?”

Set in the year 3040, Right Ascension examines mankind’s place in the Universe, how we ascended to that lofty position, and the horrifying price of that ascension.

Humanity’s position of political and technological dominance within the galaxy is suddenly shattered when a sleek alien vessel arrives unexpectedly at Earth. Admiral Daniel Atgard and the crew of the Apocalypse embark on a mission to find these enigmatic aliens, but the focus of the mission quickly turns from finding answers to exacting revenge. Meanwhile, a belligerent species of reptilian warriors, seeking to avenge a previous defeat at the hands of the human-controlled United Confederation of Planets, takes this opportunity to plan an all-out assault on Earth. Faced with overwhelming odds and the terrible knowledge of mankind’s most horrifying secret, Daniel must choose between honor … and humanity’s very survival.

How long did it take to write the book?

The first draft of the book took about 10 months to write, plus another solid month of editing. I’d say almost a year. However, several years later, I went back through and did a cover-to-cover proofreading and edit, including adding a couple of scenes.

What inspired you to write the book?

I have enjoyed reading and writing for as long as I can remember. I broke my arm when I was 2 1/2 years old, and my parents tell me it happened when I was climbing on a stool to reach a book on a high shelf. As a kid, I read lots of Piers Anthony and C.S. Lewis. I have always enjoyed creative writing, I enjoy storytelling and using the amazing diversity and depth of the English language. After getting a degree in philosophy from the University of Florida, I became interested in exploring ethical issues in a much more interesting and accessible way than what gets presented in philosophy textbooks. So, the idea of an action/adventure science-fiction novel that explored deep moral issues was born.

Talk about the writing process. Did you have a writing routine? Did you do any research, and if so, what did that involve?

I’m generally a night person, and I found myself often staying up all night writing until 8 AM or later. It helped that I wrote the book while working at a job that was not very demanding, as I’d find myself thinking about the novel all day, percolating ideas even when I wasn’t writing. It was very helpful to be able to start writing pretty much whenever the inspiration struck me.

Before I started writing, I actually developed detailed character sketches of each of the main characters: physical description, history, family, background, morals, motivation, personality, etc. I found that having realistic characters caused many parts of the book to almost “write itself,” as I found myself saying, “Well, this character would react to that by doing this…” After the first couple of chapters, I also realized that I needed an outline in order to maintain the pacing of the book, keep the sense of continuity, and foreshadow important elements that came to fruition later. Outlining was the hardest part for me; once I outlined a chapter or two, the actual writing came relatively easily.

As for research, I did a fair amount of research, mostly involving astronomy, physics, and astronomical distances. My book does not focus on the “hard sci-fi” method of describing technical details of things like hyperspace drives or force shields, so the research was not overwhelming, but enough to make sure everything was realistic.

What do you hope your readers come away with after reading your book?

I hope, first and foremost, that readers enjoy the book. That they are sad for the last chapter to end. I hope they identify with the characters and come to care about what happens to them. And I hope that maybe, just maybe, they think a little bit about their own ethics and morality and I hope it inspires them to do the right thing, even when it is hard to do.

Where can we go to buy your book?

My novels (Right Ascension and the sequel, Declination) are available through my own website, www.davidderrico.com, in both paperback and eBook formats. They are also available through Amazon.com, Smashwords, and Barnes & Noble.com.

As a new Kindle 2 owner, the first thing I did was research and pick out a case to protect it. About a week ago, I decided to try out the M-Edge Platform case and have used it since then. This case flips open from the top, and can be opened to serve as a platform to prop up your Kindle on a table for hands-free reading. I decided on it because (a) I wanted something that was rigid (as opposed to padded) to protect the screen, (b) I wanted something small and light, (c) I wanted enough room for a pen and small notepad, and (d) I like the hands-free reading idea. Oh, and I didn’t want to pay too much. I have to say the M-Edge Platform ($29.99) delivered what I was looking for.

First, a couple of pics from Amazon: 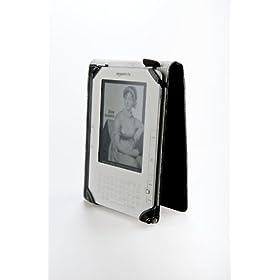 The case is essentially two rigid flaps hinged together at the top. When closed, a tab is slid into a hole to secure it. The tab takes a few seconds to insert or extract, but it closes the case securely and doesn’t seem like it would wear out like an elastic closure might. When you open the case, the top flap can be hinged backward and the tab can be inserted “in reverse” to create an A-shaped stand. This will hold your Kindle upright for hands-free reading (well, you still need to hit the next page button!). When opened and pressed flat, it doesn’t add too much thickness to the Kindle, so you can still hold it and read easily in the case, and you can reach the next page buttons on either side. I also appreciate that it doesn’t weigh too much, and I leave my Kindle in the case for reading.

The Kindle attaches with two leather (I elected the cheaper imitation leather model, but I am pleased with the feel of it) corner attachments at the bottom corners and two elastic attachments at the top. From pictures, I feared it wouldn’t hold the K2 securely, but it does, I have no worry of it slipping out. I don’t know if the elastic enclosures become less secure over time, however.

I also liked that there is a small pen loop at the top, and a business card pouch plus a thin pocket on the inside of the front cover. I like the idea of keeping a pen and small note pad to jot down writing ideas, but they add almost no bulk or thickness to the case. The inside covers are lined with a soft felt material.

There is also room along the left side of the K2 (and a pouch to slide the base into) designed to hold an M-Edge reading light (which I do not have). Some may not like that this causes the Kindle to be off-centered in the case, and it may be difficult for people with smaller hands to reach the left-side buttons, although I had no problems with it.

All in all, I have to say that the case exceeded my expectations, and I am actually a picky reviewer. The quality of the materials feels good (of course, it’s fake leather, but I’m fine with that… they do make a more expensive real leather version). It is about as thin and light as possible while still affording good protection, and it feels supple on the outside but there is a rigid core in the front and back covers that appears to protect the K2 well. The A-frame reading platform may come in handy, I’ve used it while eating lunch a couple of times, although I normally read with the case folded all the way back.

Essentially, the case did everything I hoped for it to do. Those of you who like to carry more than a pen, business card, note pad, and light with your Kindle (like if you want to bring the USB cord/power adapter or keys) may not like this device. And it does not fully enclose the Kindle, so it would not protect as well from dust or spills as the zippered cases. But, if your needs are like mine, I can heartily recommend this case and give it an A.