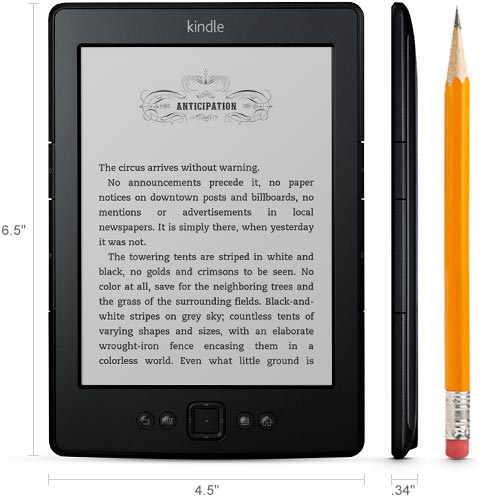 Just a quick note that, today (Dec 17) only, Amazon offers its Kindle for just $49 with free shipping. That is an amazing price for a new Kindle!

Yes, it is the entry-level model, without the built-in light or the touchscreen, and it does have Amazon’s “special offers,” but for this price it’s still a great deal for an e-reader for yourself or as a gift.

Pick it up direct from Amazon here — but remember, the sale is today only. Tomorrow it will be back to $69.

The newest Kindle (Kindle 5?), called the Kindle Paperwhite, came out a couple of weeks ago, and from all the reviews I’ve seen, it’s a big hit.

The main new feature is the side-lit e-Ink display, which allows for reading at night or in low light, while still retaining the easy-on-the-eyes nature of e-Ink and ability to be read in direct sunlight. Reviews also say the lighting is more even than the similar Nook Glowlight, and that it noticeably improves the contrast of the display (Amazon says by 25%), because it makes the greyish background look more white. In the pics and videos I’ve seen of it so far, that was the first thing I noticed — the effect seems pretty dramatic. The display is also higher resolution (212 ppi vs. 167 ppi, or 62% more pixels) than the previous e-Ink Pearl screen used in the last two Kindle generations.

The Kindle Paperwhite is available in both Wi-Fi and WiFi + 3G flavors:

While the new Kindle is impressive, and is probably a must-have for anyone who likes reading at night, it does lose some features from earlier models. Obviously, there is no physical keyboard, which Amazon went away from with the last generation Kindle Touch, but everything is accomplished through the touchscreen — including typing on a touchscreen keyboard and tapping or swiping on the screen to turn pages when reading. It also only has 2GB of storage (down from 4GB), although that is still enough to hold a thousand books or so, and Amazon will back up all your purchases in their “cloud” for free, so it’s not much of a limitation. The newest Kindle also removes the speakers and headphone jack, and thus is unable to play text-to-speech, which is a deal-breaker for some people. It comes with a USB cable (which you can plug into your computer to charge the device), but if you want a power outlet adapter, that’s an extra $10 now. (Again, if any of these limitations bothers you, the Kindle Keyboard is still available.)

The software on the new Kindle Paperwhite is a big departure from the simple, text-based lists that dominated the older Kindle user experience. The user interface is much more “tablet-like,” with a scrollable list of book covers, and a strip of menus across the top. Everything is accomplished using the touch screen, including adjusting the strength of the light (in 24 steps, from very dim to quite bright), selecting a book to read, shopping in the Kindle Store, or tapping and holding on a word to bring up options to search that word in the built-in dictionary, look it up on Wikipedia, or even have it translated. While the addition of cover art to the home screen seems like a welcome change and an easier way to browse books, Amazon does place a strip of “Suggested Books” or “Bestselling Books” at the bottom of the display — and this is in addition to the “Special Offers” below that if you opted for the cheaper model — which shows that Amazon is selling Kindles and Kindle Fires at very aggressive prices partially in the hopes that users will buy lots of stuff from their excellent and expanding content ecosystem, including Kindle Books and newspapers, as well as videos and songs and apps for the Kindle Fire.

In any event, it looks like a solid offering from Amazon. While it came out later than Nook’s Glowlight model, every review I’ve seen has praised the Kindle Paperwhite’s lighting system as superior to the Glowlight’s, so those of you who like to read at night will probably be glad you waited.

Do you have a Kindle Paperwhite? Please feel free to share your experiences and thoughts about it in the comments below.