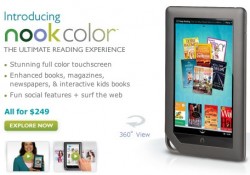 The Nook Color: not really an e-reader, more like an iPad Lite.

Well, B&N’s big announcement today turned out to be as expected (since it was leaked a few days ago): the Nook Color, a tablet computer with a 7″ LCD touchscreen display. As I’ve said many times before (also here and here), backlit LCD screens just aren’t as good for reading as e-Ink screens: LCD screens cause more eyestrain (for most people), use much more battery power, wash out and are unreadable in sunlight, and even make it harder to fall asleep.

So why use them? Well, LCD screens (like your cell phone, computer monitor, or many TV sets) display color and video, two things the current crop of e-Ink screens can’t do yet. That’s great for surfing the Internet and watching videos, but for reading books, I’d rather stare at a screen that is easy on my eyes and mimics paper, instead of my TV set.

The Nook Color, which is $249 and will be available in B&N stores and online at B&N’s website starting November 19, promises more interactive e-books (such as cookbooks with color photos and videos), a whole new specialty section for children’s interactive e-books, a built-in web browser (using the Wi-Fi wireless connection), and various games and apps, including Sudoku, crossword puzzles, chess, and Pandora Internet radio to start. It will also focus more on color newspapers and magazines. It runs Android 2.1 (to be updated to 2.2), and can view Microsoft Office (Word, Excel, Powerpoint) files. It can also view photos, and play audio and videos. It will supposedly support Flash-based web content in the 2.2 Android update.

But I think it’s more important to look at what the Nook Color, by virtue of choosing to go with an LCD screen, does not have:

I’m a bit baffled, to be honest. Compared to the K3, I think it’s a disaster. For $139, you could get a Kindle 3 that’s much less expensive, easier on the eyes, can be read in sunlight, weighs half as much, and has a battery life measured in weeks instead of hours. For $189, you get all that and throw in free-for-life 3G wireless connectivity to browse and download books almost anywhere — still $60 less expensive than the Nook Color.

I think a better comparison is to the iPad. For half the price of the $499 iPad, you get a smaller (7″ screen vs. 9.7″), lighter (15.8 oz vs. 24 oz) tablet computer with less memory (8 GB vs. 16 GB, but the Nook Color does come with a Micro SD card slot, so this is about a wash). I haven’t seen the processor specs of the Nook Color yet, but I’d be surprised if it was as fast as the iPad. It runs the Android operating system instead of Apple’s iOS, and some people might prefer that, although Apple still has a strong lead in the number of apps available for its platform.

I’m still a little baffled by the direction B&N is going — I thought they “got it” and understood what we readers wanted: an inexpensive, light, easy-on-the-eyes non-backlit screen with a battery that lasts forever. Instead, they seem to be chasing the “hype” of color — something non-readers have been clamoring for, claiming the iPad will “kill” the Kindle for some time now — even going so far as to make “Color” a large part of the name. It seems to me like they’ve given up on competing with the K3, and have decided to branch in a different direction instead. Well, time will tell if it’s successful, and I hope they at least keep updating the original Nook line (which is now a generation behind the Kindle 3 and is in desperate need of a refresh), so those of us who have no interest in a Nook Color tablet computer can just ignore it. But I was looking for a Nook 2, a worthy competitor to the K3 that would push the e-reader market forward. Instead, we got the iPad Lite. Color this reader disappointed.

9 Responses to “Nook: Color Me Disappointed”