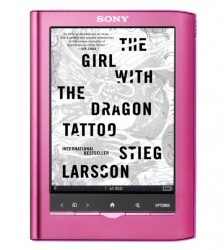 Today, Sony refreshed its line of e-readers, bringing the new e-Ink Pearl screen (used in the Kindle 3) to the Sony line. One could argue that Sony started the modern e-reader revolution (as its first model came out before the Kindle), but it wasn’t until Amazon’s Kindle 2 came out in 2009 that e-reader sales really took off. Since then, Sony has been the forgotten one of the “Big 3” (Amazon, B&N, Sony) — and has even taken a back seat to Apple (which doesn’t even make e-readers) in the eyes of many.

Like with much of their other technology, the Sony hardware is impressive, but somewhat quirky, expensive, and lacking in ease of use.

First, the good news: the new Sony e-readers have the higher-contrast e-Ink Pearl screen we’ve discussed when covering the Kindle 3. They are also very small and light — even smaller and lighter than the K3. They all sport new touchscreens that use infrared sensors built in to the edges of the screen, so it doesn’t impede reading (the old touchscreen layers made the screen harder to read and thus kinda sucked). And they support DRMed ePub files, so you can read library books on them (although it’s a bit of a hassle).

On the down side, they’re considerably more expensive than the Kindles, their entry-level version only has a 5″ e-Ink screen (compared to the 6″ one found on Kindles and Nooks), and only their most expensive model (not yet available) has wireless connectivity — the 2 models available now don’t even have Wi-Fi, let alone 3G. That means you have to use your computer to purchase, download, and transfer books to your device.

All 3 models use the new e-Ink Pearl displays and improved touchscreens. The Touch Edition adds the larger (standard-size) screen and memory slots. The Daily edition adds an even larger screen and Wi-Fi + 3G wireless connectivity.

The 5″ PRS-350 Pocket Edition has 2GB of built-in storage (no memory card slots), weighs only 5.64 oz (the Kindle 3 Wi-Fi weighs 8.5), measures just 5.71 x 4.11 x 0.33 inches, and costs $179. Compared to the Kindle 3 Wi-Fi, you pay $40 more to get a touchscreen, ePub support, and smaller size, but you lose out with a smaller screen, no wireless connection, no Internet, no text-to-speech, worse battery life, less storage, and you don’t get to use Amazon’s Kindle e-book store: Sony’s E-Reader Store is far inferior. For just $10 more, you could even splurge for the Kindle 3 Wi-Fi + 3G, and get unlimited 3G connectivity for life.

The 6″ PRS-650 Touch Edition (does that name make sense when they all have touchscreens now?) costs $229, and brings you the larger screen and expandable memory in a slightly larger but still light (at 7.93 oz) package. For $90 more than the K3, you get the same size (and type) screen, so it’s more of an apples-to-apples comparison. Unfortunately, the library book support (an important feature), touchscreen (which I don’t think adds much to the reading experience), and slightly lighter weight don’t outweigh the $90 cost savings and other advantages of the Kindle.

The 7″ PRS-950 Daily Edition adds wireless (Wi-Fi and 3G) connectivity, along with a larger 7″ screen. At 8.99 ounces, it’s fractionally heavier than the K3, but still light enough for easy one-handed reading; that’s probably a good trade-off to get a larger screen (which means more words per page and fewer page turns when reading, especially if you like to read at larger font sizes). The problem is the $299 price tag, which pushes it almost into the 9.7″ Kindle DX2 territory ($379).

Sony is known for making great hardware, but they tend to drop the ball on customer experience (why are they still forcing us into Memory Sticks instead of letting us use the SD and MicroSD cards we have lying around?). Here, Sony doesn’t offer a way to buy and download e-books wirelessly, whereas the Kindle lets you buy any book you can think of in 30 seconds, without a computer. Even when using your computer, you’ll find the Sony E-Reader store almost an afterthought, with lower selection, worse prices, and an inferior browsing experience to the Kindle store. I’d only recommend the Sonys to someone a bit computer-savvy and who enjoys the hassle of finding e-books from other sources (like Project Gutenberg and libraries).

And, as with most Sony products, the bottom line is that they’re too expensive compared to the competition. I just can’t see paying close to double the price (compared to the $139 K3 Wi-Fi) for the $229 Touch Edition, and not even getting Wi-Fi connectivity.

But, if you really like touchscreens or library books, and are OK with using your computer to find, organize, and download e-books, the new Sony E-Readers are nice devices with great screens. They also offer options, if you prefer a slightly smaller or larger screen. Just don’t look too closely at the prices. =)