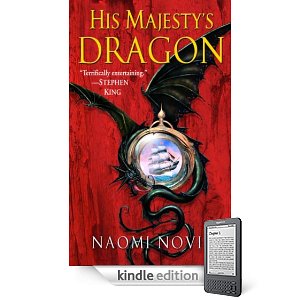 His Majesty's Dragon, by Naomi Novik

I recently finished the Kindle edition of His Majesty’s Dragon, by Naomi Novik. The book is the first in the Temeraire Series, named after the dragon introduced in the first book. While the series was originally supposed to be a trilogy, I believe it has grown to at least 7 books so far.

The novel takes place in an alternate history universe, in the 19th Century, and centers on the battle between England and Napoleon’s French army. As in our own history, the English navy reigns supreme, but the twist in Novik’s universe is the existence of dragons: intelligent, powerful, flying creatures that pair up with human riders and form a powerful air force that turns the tides of battles and the course of history.

The book starts out with a naval battle and an English ship captain, and after the battle is concluded, the English captain captures a rare dragon egg headed for France; before they can return to port (where the dragon hatchling could be paired with an appropriate “aviator”), the egg hatches and the dragon chooses Captain Laurence as its human companion. At first, Laurence is despondent (the sailors each had drawn lots for who would be forced to give up their entire lives to live in isolation as a dragon rider), but he quickly comes to realize what an intelligent and extraordinary companion the dragon, which he names Temeraire, is.

The story continues through the growth of Temeraire into a large, powerful, agile, and extraordinarily intelligent dragon. The bond between Laurence and Temeraire quickly becomes unbreakable, and Laurence joins the cadre of aviators and brings Temeraire into battle against Napoleon and the forces of France.

I enjoyed the book very much. Temeraire becomes a fascinating character, and the human-dragon interaction that permeates the book makes for a fascinating “what if?” scenario. The intricacies of dragon combat (including the dragon’s chosen captain and a crew of aviators who attach themselves to the dragon’s harness and help out in battle) are interesting and well-done. There are numerous types of dragons detailed, each of different size and speed, and some of which have powerful abilities like being able to spit acid or breathe fire. As you can imagine, the dragons are powerful military weapons, and shape the course of the war.

While I enjoyed the book and the main characters (Temeraire and Laurence), I didn’t find the story particularly groundbreaking or original. The dragons were as you would expect: intelligent, noble, awe-inspiring creatures, who bond with humans and are capable of human speech (from birth!). Captain Laurence is bold, honorable, and likable, almost to a fault. While he is originally conflicted over leaving his fiancee and naval career, experiencing life with Temeraire quickly (as you would expect) converts Laurence into Temeraire’s closest friend and soulmate. I found that aspect of the book a bit predictable — of course he’s going to fall in love with being a dragon rider! Who wouldn’t? In fact, that premise (that most of us secretly wish for the splendor and adventure of befriending and riding a dragon) is the whole reason the book is so likable. It’s an enjoyable escape and a scenario that’s quite a bit of fun to imagine.

The book was well-written, with few or no typos, grammatical issues, or formatting quirks on the Kindle version I read. There was a good combination of action, human drama, and a touch of historical military strategy. The pace of the book was good, as even the “slower” parts (without action or battles) kept my attention as Temeraire grew and matured and the bond between dragon and human grew. Ultimately, the book served as a good escape, a fun diversion, and a peek into the possibility of living among dragons in all their incredible majesty.

Overall, I’d rate the book 8 / 10, and look forward to reading more in the series. For anyone looking for a solid dragon adventure with a bit of an alternate history / military twist, you will probably enjoy this one quite a bit.

His Majesty’s Dragon is currently $6.39 on the Kindle Store, although I nabbed it when it was free a couple of months ago (presumably, Random House / Del Rey planned to get readers hooked on book 1 so they’d buy the remainder of the series). It currently averages 4.5 stars (out of 5) over 340 Amazon reviews, which is excellent. One note: the publisher blocks the text-to-speech feature, although they do not currently support the agency pricing model.