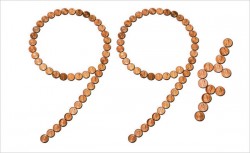 I bet the big publishers wish they had been happy with $9.99.

As I mentioned in this post about the agency model, 5 of the “Big 6” publishers demanded that Amazon stop discounting e-books to $9.99, and insisted on controlling retail prices — immediately raising many new release e-book prices to $12.99 or $14.99.

Amazon argued that the agency model and those high prices were costing publishers sales, and I knew that readers would vote with their wallets, but for a while it appeared that publishers were doing OK with $12.99 e-books (although $14.99 pricing never really caught on). But a look at the current Amazon bestseller list shows that readers are voting with their wallets in a big way, and what they want is inexpensive e-books.

In fact, almost exactly half of the Kindle Top 100 consists of e-books that are $5 or less. (Additionally, there are several selling for about $5.50 that I’m not counting.) In fact, a quarter of the e-books on the bestseller list are $1 or less.

On top of that, the books at the very top of the list are skewed even more towards low-priced e-books than the whole list. Books $5 or less make up:

And, more than half of those books are very low-priced: $1 or less. Books $1 or less make up:

And this does not include all the free e-books being downloaded on Amazon.

Further exacerbating the publishers’ nightmare, a decent percentage of these e-books are by independent authors, including uber-indie Amanda Hocking, who has 3 e-books in the Top 12 and reached #2 overall in the Kindle store. She sells as many books in a day as I sold last year, and the big publishers didn’t want her. But in 2011, it’s the readers, not the publishers, who have the power.

Maybe, instead of fighting with Amazon over $9.99, publishers should have been happy that Amazon had ingrained $10 as a reasonable price point for e-books. Instead of thinking they could get even more, maybe they should have thanked Amazon for getting customers to pay that much for e-books that have no printing, shipping, or returns costs. Because now readers are demanding more and more low-priced and free e-books, and don’t even feel guilty about it because they feel that publishers tried to take advantage of them with overpriced e-books, delayed releases, poor formatting, blocking lending, blocking text-to-speech, and invasive DRM. And now big publishers are being crowded out of the bestseller lists by independent authors, and are being forced to lower their own big-name titles to $5 just to compete with indie authors at $1 and $3.