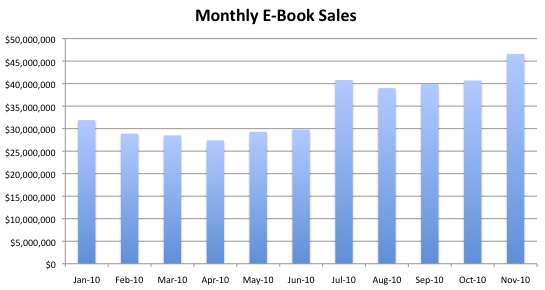 The post from Publishers Weekly goes on to say that sales for the first 11 months of 2010 total $391.9M, which is slightly higher than the total of the monthly numbers they’ve provided (listed below, which add up to $382.2M). Either way, it’s well above 2009’s year-end total of $165.8M, and that doesn’t even include the numbers from December, which I’d expect to be a new record, based on reports of several million people unwrapping new e-readers this holiday season.

I haven’t seen the numbers yet for mass-market paperback sales for November (the post merely said they were decreasing the fastest of all categories, at -14%), but they were $60.2M in October. Could we see $60M monthly e-book sales in December 2010? If not, how about Jan 2011 (when the effect of all those new e-readers may really be felt)? I don’t think it will be long before e-book sales catch or overtake mass-market.

UPDATE: The full numbers are in, and mass-market paperback sales for November are down 9.5% for the month and 14.0% year-to-date, at only $47.7M, just a couple percent higher than e-book sales for the month.