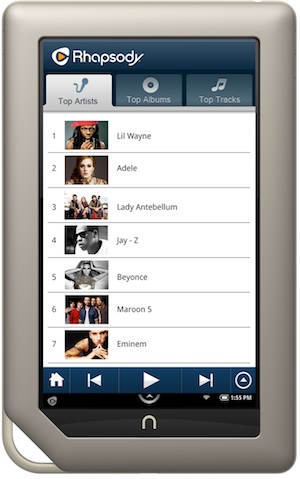 Today Barnes & Noble updated its Nook Color “reader’s tablet” with a new version (which I’m calling the “Nook Color 2”) with a faster processor and the same $249 price. B&N, in keeping the tradition of using overly-descriptive but not very helpful names that eschew numerals (like the “Nook Simple Touch” for the Nook Classic 2), is calling it the “Nook Tablet.”

It comes with the same 7″ LCD screen as its predecessor (the original Nook Color). LCD screens are backlit (like those on your computer or cellphone), and aren’t as easy on the eyes or energy-efficient as the e-Ink displays used on the Kindle or Nook Classic e-readers. On the other hand, they do allow for color and video, and the “VividView” laminated, IPS, LCD display of the Nook Color (and Nook Tablet) is said to be quite good.

The new name shows that B&N is positioning the Nook Tablet as more of a tablet than a reading device, as more of a multi-function device that can play videos, browse the Internet, display magazines, offer interactive children’s books, and run a small selection of specially-curated apps (like Angry Birds and some of the popular ones, but not the thousands of apps on the Apple App Store or Android Market). Being a general-purpose tablet (as opposed to a single-purpose reading device like the Nook Classic or Kindle) means it’s competing against Amazon’s new Kindle Fire ($199), as well as Apple’s larger (and more expensive) iPad 2 ($499+).

The new Nook Tablet looks very similar to the original Nook Color; the changes are mostly under the hood. It comes with a faster processor and more RAM: a dual-core 1GHz Texas Instruments OMAP 4 CPU with 1GB of RAM. It sports 16GB of internal storage, plus an SD card slot for expansion.

To recap, the Nook Tablet’s specs:

Certainly an interesting contender in the 7″ tablet arena. On paper, the specs are a bit better than the Kindle Fire, although Amazon counters with its super-fast Silk browser and by offering to store all your media purchases in the cloud, ameliorating the lesser memory of the Fire. I think Amazon’s $50 price advantage may be the most important difference to many buyers. In any event, both $199 and $249 certainly look good when compared to the iPad 2’s $499 starting price.