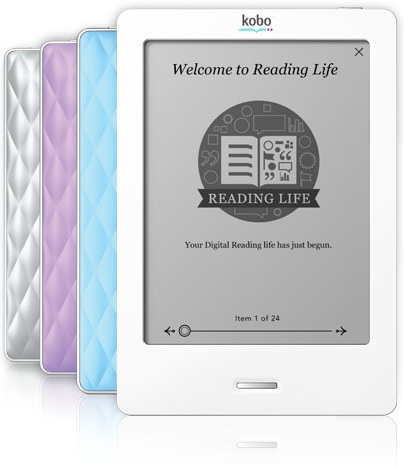 Kobo today announced their third generation e-reader device: the Kobo Touch. The Kobo Touch will retail for $129.99, and sports some impressive features:

This is an impressive upgrade over the original Kobo E-Reader and 2nd-generation Kobo Wireless. In addition to adding the Pearl e-Ink screen (with 50% better contrast than earlier versions), it also adds the IR touchscreen used in the newer Sony e-readers; this is important, as older touchscreen technology added a layer above the e-Ink screen and decreased readability. They’ve kept the weight low (it’s smaller and lighter than the already-light Kindle 3, which is 8.5 ounces), but used a faster processor, which allows for nice PDF panning and zooming and should negate some of the negatives I found in my Kobo Wireless review.

Speaking of the Kobo Wireless, Kobo today lowered the list price of that 2nd-generation device to $99.99, allowing them to provide the first e-Ink-based e-reader to officially retail for under $100 (actually, the Kobo Wireless has been going for that price or lower for a while, but it was listed at $129). You can also find e-reader deals at that magic sub-$100 price point, such as today’s one-day-only refurbished Kindle 2 with 3G for $90 at Woot, or some recent $99 deals on the Nook Classic.

But back to the Kobo Touch: Kobo managed to come in with a touch-based, Wi-Fi enabled, 6″ Pearl e-Ink screen for $130, slightly undercutting the $139 Kindle 3 Wi-Fi. Impressive. So how does it stack up?

First of all, B&N better have a great announcement up its sleeve (which is rumored to come tomorrow) regarding the Nook Classic, which is now thoroughly outclassed by both the Kindle 3 and Kobo Touch.

Sony’s e-readers probably take the biggest hit here. Until today, they had held the distinction of being the only mainstream e-readers with a touchscreen, but they were hindered by high prices. The Kobo now pretty much eats their lunch. Comparing the Kobo Touch ($130) to the Sony Touch PRS-650 ($229) with the same 6″ e-Ink screen and IR touchscreen, the Sony gets slaughtered: not only is it about $100 more expensive, but it doesn’t even include Wi-Fi. The Kobo is smaller and lighter, too. The only thing the Sonys have going for them are that they are available in 5″ and 7″ sizes, but the 5″ PRS-350 still costs $20-50 more than the Kobo Touch and the 7″ PRS-950 does provide Wi-Fi but costs a whopping $299.

Even Amazon will have to take notice of the Kobo Touch. While the Kindle 3 probably keeps the title as the best all-around e-reader, the Kobo Touch does have some nice things going for it. First, it’s $9 cheaper. Second, it has a touchscreen, which I don’t personally prefer in an e-reader, but some people like. Third, it is smaller and lighter than the Kindle, and I do like the rubberized, quilted back they’ve kept from previous Kobo models. Kobo even managed to steal a bit of Amazon’s thunder from the $114 ad-supported Kindle 3 with Special Offers by offering the Kobo Wireless for $100.

I haven’t used the new Kobo Touch yet (it’s scheduled to ship in “early June”), but it appears the new speed will negate one of the Kobo Touch’s biggest weaknesses: its sluggish operation and delays in opening books. The touchscreen seems to be implemented well: you can now highlight, look up words in the dictionary, and even drag a slider to quickly move through books, which is an impressive feature I’ve requested for the Kindle before. It works with library e-books, which won’t be available on the Kindle until later this year. And it has the new e-Ink Pearl screen; now that I’ve seen it on my Kindle 3, I wouldn’t recommend a non-Pearl screen.

On the other hand, the Kindle still has the most features (audio, text-to-speech, Internet functionality, games & apps), better battery life, a better dictionary (the dictionary on the Kobo Wireless only works on Kobo-purchased e-books), and the best e-book store.

So what’s the verdict? Without actually having one to review, I’d say that the Kobo Touch is a very credible contender, and worthy of serious consideration if you’re shopping for an e-reader. If you prefer a touchscreen, it looks like the Kobo Touch is currently your best bet. If you’re neutral on touch (or dislike it — I prefer page turn buttons), the Kindle 3 does have some features you may miss on the Kobo, and I think it maintains a slight edge. If you’re looking for a sub-$100 e-reader, the Kobo Wireless is worth a look, but quite honestly there are better deals out there (like finding the Kobo Wireless for well under that price, the $114 Kindle with Special Offers, or the older model Kindle 2 or Nook Classic).