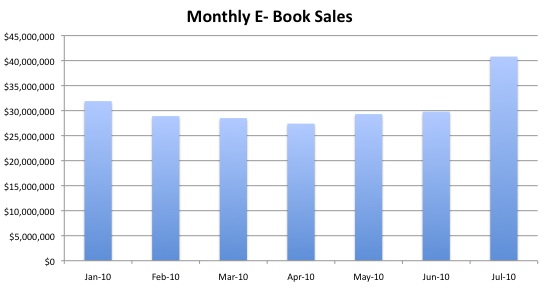 The latest industry e-book sales figures are in (see previous months’ reports here), and July was a record month for e-book sales. The AAP and IDPF are reporting July e-book sales are a whopping $40,800,000, almost a 37% increase from June’s numbers, and a 150.2% increase (well over double) compared to July 2009’s numbers. E-book sales are up 191% year-to-date (for one point of comparison, the entire second quarter of 2009 was only $37.6 M).

I’ve spent more time analyzing these trends in my last few posts, but July’s very strong numbers seem to confirm the continuation of the strong upward long-term trend and prove April’s weak numbers to be an aberration (which is looking more and more like the fault of publishers raising e-book prices through the agency model). It also blows away the previous high: January 2010, an outlier I believe is due to e-book shopping driven by e-book readers received as Xmas gifts, and the cold weather keeping people indoors and downloading new books to read wirelessly. For convenience, here are all of this year’s monthly figures again:

As you can see, July’s figures are a huge jump for e-books after a relatively sluggish (mostly flat) first six months of the year. I wonder if the enormous jump from the prior month has anything to do with Amazon raising royalty rates on self-published works to 70% on June 30. Perhaps that attracted some small publishers that are being counted in these sales figures to release more Kindle books. I know most self-published authors saw increased revenue when raising their prices from 99 cents into Amazon’s $2.99 to $9.99 range to qualify for the higher royalties (I, for one, sold half the books at three times the price and six times the royalty), but we aren’t included in these sales numbers — the AAP never asks me for my sales info. =)

I suppose the bump could be due to summer reading, but that large a jump seems like it should have a more tangible explanation — and it’s probably not the Kindle 3, which was only made available for pre-order July 28 (and started shipping in August). I’ll keep an eye out for possible causes, and it will be interesting to see if August sales match July’s torrid pace.

In any event, monthly sales of over $40 million demonstrates e-book sales creeping ever-closer into print book territory: for comparison, adult mass-market paperback sales were $60.6 M (and are down 13.1% year-to-date, so e-books are definitely closing the gap). Adult trade paperback sales are still a hefty $111.1 M (but down 8.6% for the year), and adult hardcover sales are $74.1 M. E-books still have a ways to go to reach the combined $245.8 M of adult print book sales (e-book sales are about 1/6th of that number), let alone the $1.5 billion per month of the entire book industry (which includes children’s books, professional books, and educational textbooks). The big question is whether e-books will continue to accelerate at their rapid pace (doubling or tripling each year) — and, if so, how long before they overtake print book sales.