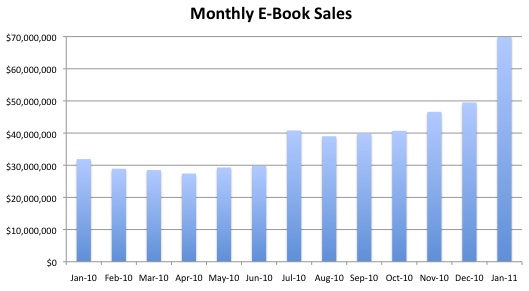 Even more impressive, e-book sales not only surpassed, but thoroughly trounced both adult mass-market paperback sales ($39.0 M) and hardcover sales ($49.1 M) for the first time ever. I would say this is a shocker, except I predicted it in my post on last month’s sales stats report, where I predicted that e-book sales would overtake mass-market paperback sales in January. Even adult trade paperback sales are looking vulnerable, at $83.6 M (although they’re probably safe until next January). Also interesting: while e-books more than doubled from last January’s sales numbers, mass market paperbacks (-30.9%), trade paperbacks (-19.7%), and hardcovers (-11.3%) all suffered double-digit percentage point drops from last year. Ouch.

One other point: these sales figures come only from large publishers; independent authors aren’t counted in these figures. For a while, we could safely be ignored as a rounding error, but considering that two separate indie authors have now hit not only #2 in the overall Kindle store, but one has now hit the #1 spot (and indies control a fair portion of the Top 100), including those sales would skew the numbers even more heavily in favor of e-books.

Just to keep things in perspective, the figures above only cover the adult book category, meaning that children’s books and educational books aren’t included. Looking at the overall numbers, total print book, e-book, and audiobook sales in January were $805.7 M (down 1.9% from last January’s $821.5 M). That makes e-books about 8.7% of all book sales by dollar amount (with lower average sale prices, they’re surely a higher percentage by number of books sold).

Another interesting note: total adult print sales declined by $44.3 M from last year, while e-books made up most of the difference, increasing $38.0 M.

I expected a large increase after what I believed would be a very successful 2010 holiday season for e-reader sales. I think a lot of people got Kindles and Nooks in December and started really buying e-books in January (perhaps with Amazon gift cards they also got for Christmas). But this much of an increase was a surprise even to me. However, I would not be shocked to see sales in February (and perhaps the next few months) dip a bit from the January peak, perhaps settling in around $60 M for the next couple of months. But I believe the overall trend will continue to see e-book sales continue their rapid growth.