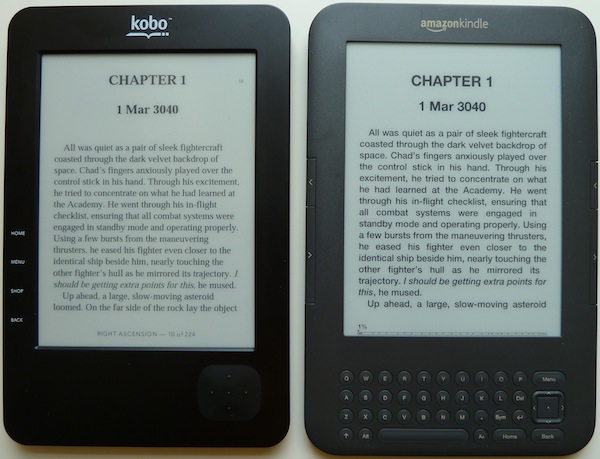 The Kobo Wireless next to the Kindle 3

I recently purchased a Kobo Wireless E-Reader, as a backup to my Kindle 3. The Kobo has more limited functionality than the Kindle, but its light weight and low price somewhat make up for the lack of features. In fact, the Kobo’s strict focus on reading — without Internet access or the ability to play games or apps, for example — might appeal to some people, as might its simple interface (a power button, 4 side buttons, and a 5-way joystick).

The Kobo Wireless is Kobo’s second-generation e-reader, which boasts Wi-Fi connectivity (to shop the Kobo store directly from the device), a better screen, more speed, and a built-in dictionary over its predecessor. It retails for $139, the same price as the Kindle 3 Wi-Fi, but you can often find it discounted below that price.

The Kobo Wireless comes in 3 colors (white front/silver back, white/lilac, and black/black). The first thing you notice is the light weight: at 7.8 ounces, it’s even lighter than the already-light Kindle 3 (8.5 ounces) or Sony Touch (7.93 ounces). It also has a textured (“quilted”), rubberized back that feels good in your hand. On the other hand, the front and 5-way joystick button feel a bit cheap, and the joystick can be a bit loud.

While it has the same size 6″ e-Ink screen as the Kindle, it lacks the newer e-Ink Pearl screen (which provides darker blacks and 50% more contrast) of the Kindle 3 and newer Sony e-readers. However, it is still quite readable, and you can see the difference for yourself in the photo above. To be honest, the Kindle 3’s bolder font accounts for about half the difference. In fact, I found the Kobo to be a quite decent e-reader … but it repeatedly fell short when compared to my experiences with the superior Kindle 3. I think if I wasn’t already used to (spoiled by?) a Kindle 3, I would have a more favorable impression of the Kobo.

I found some things to really like about the Kobo: the light weight is really striking, and the back of the device feels good in your hand. I also liked how, when the Kobo went to sleep or turned off, the screen changed to show the cover of the e-book you’re reading, and told you what percentage of the book you had read. A simple, but very nice touch, and far preferable to the Kindle’s rotating dead author screensavers. I also liked the “I’m Reading” shelf, which lists only those books you’ve started to read (and shows the book cover of the current e-book); the rest of your books are found on the “Books” shelf. Once you’ve finished reading a book (by turning the last page), a book moves from “I’m Reading” back to “Books.” It’s a pretty good system, although I’d like to add an “Already Read” shelf to the “I’m Reading” and “Books” shelves. The latest software update (1.9) allows you to manually move books from “I’m Reading” back to “Books.”

Although I haven’t tried the process yet, I also like the option to access library e-books on the Kobo. Kobo (like Amazon and B&N) has software for PCs, Macs, iOS devices, Android, etc., which allows you to read your Kobo e-books on multiple devices. Another nice touch is that the Kobo comes pre-loaded with 100 classic, public domain (free) e-books. While you can find and download these yourself to read on any e-reader, the fact they come pre-loaded makes things simpler and lets people start reading right away.

A few things are different from the Kindle: the most obvious is that you can buy books from the Kobo e-book store instead of the Kindle store. While the Kindle store is #1, the Kobo store has good availability and comparable prices, so I don’t see it as a huge weakness. Of course, you can also “side-load” books (using the included USB cable) that you’ve downloaded to your computer from Project Gutenberg, Smashwords, or numerous other sites.

The Kobo lacks text-to-speech, Internet access, and the ability to run apps. While lacking these features is generally a negative, for some readers it won’t be an issue and might even be a selling point: the lack of distractions from reading could appeal to parents who want their kids to use an e-reader, but don’t want them playing games or surfing the Internet.

The Kobo also lacks a full keyboard and many of the buttons of the Kindle. This makes certain tasks (like entering a password to connect to a wireless network) cumbersome, as you have to navigate an on-screen keyboard with the 5-way joystick (think of entering your character’s name using an old video game controller). I also prefer the easy-press page turn buttons on either side of the Kindle to the louder, harder to press joystick used to turn pages on the Kobo; the low placement of the Kobo’s joystick makes it hard to read one-handed, even with the light weight. On the plus side, there is less clutter, and navigation is pretty straightforward with the more limited selection of buttons.

While the Kobo only comes with 1 GB of internal memory (compared to the 4 GB of the Kindle 3), it does have an SD card slot, which is a nice feature. You should have plenty of room to hold hundreds or even thousands of e-books on either device.

There were a few definite negatives about the Kobo (especially when compared to the Kindle): the Kobo is slower, and takes some time to turn on (about 29 seconds when I timed it). Not an outlandish amount of time, but it is annoying since the Kobo’s battery seems to drain relatively quickly when asleep (lasting about a week, even if not used), and performs much better when turned off completely. By comparison, Amazon recommends you leave the Kindle in sleep mode most of the time (the battery drain doesn’t seem to be as bad), and the Kindle wakes from sleep mode almost instantly.

The Kobo is also slower when opening books (you get a loading screen, which only takes a few seconds, but the Kindle is nearly instant), changing pages (again, not a HUGE delay, maybe about a second, but slower than the Kindle 3), and loading new books onto the device (the Kobo spends about 10–15 seconds per book “processing” them, which adds up if you load several books at once). Again, nothing deal-breaking, just noticeably slower when compared to the Kindle 3.

The Kobo also lacks the ability to play MP3 audio files (including audiobooks), does not have text-to-speech, and doesn’t let you bookmark, highlight, or take notes within e-books. Since I don’t use these features much, it’s not a deal-breaker for me, but they are limitations to be aware of. It’s also a little harder to get around e-books in the Kobo; while the 1.9 software update adds the ability to jump to a specific location, the lack of keyboard makes the process cumbersome.

One definite negative is that, while the Kobo Wireless adds a built-in dictionary (that the older Kobo Reader lacked), it only works with e-books purchased from Kobo, not books side-loaded from the computer. For me, the dictionary is a must-have e-reader feature, one that I end up using far more than I first expected because it’s so convenient. Since most of my books are side-loaded from various sources (I haven’t bought any directly from Kobo yet), it means there’s no dictionary a good chunk of the time. Even where it does exist (like on the pre-loaded books), the process is slower and more cumbersome than the Kindle: press menu, select “Dictionary,” press the joystick, choose the word, press the joystick, wait a few seconds, and a definition pops up (covering most of the screen). Like on the Barnes & Noble Nook, this multi-step dictionary implementation pales in comparison to the Kindle, where you simply select the word and a short definition pops up at the bottom of the screen (you can press “enter” to see a longer definition if you want).

Another odd quirk: on side-loaded e-books, you’ll see small page numbers in the right-hand margin, and these numbers can intrude into the text area (causing nearby text to dim). Not a huge deal, but a minor annoyance that nonetheless was noticeable and jarred me from becoming engrossed in a book a couple of times.

The battery life is listed as 10 days, very good compared to most electronic devices, but inferior to the Kindle 3’s claim of 1 month on a single charge.

All in all, the Kobo Wireless makes a decent enough e-reader. If you’re looking for light weight, limited features (if you don’t need Internet access or consider the lack of it and focus on just reading as a positive), and the ability to read library e-books, the Kobo makes a decent choice. It does have some nice features, like the light weight, pre-loaded books, and book covers as screen savers. It seems to generally work pretty well for just plain reading, which is the #1 priority. Unfortunately, it falls short when compared to the speed, features, and e-Ink Pearl screen of the Kindle 3, and Kindle owners may find it disappointing in comparison. The Kobo Wireless does compare pretty well to the Nook (the Kobo has similar speed and lighter weight) and Sony E-Readers (the Kobo has Wi-Fi and a much lower price), when looking at other e-readers capable of reading ePub library e-books.

My overall conclusion is that, for the same $139 price, the Kindle 3 Wi-Fi is a clearly superior e-reader for most people. However, the Kobo Wireless can make a compelling low-cost alternative (as when the original Kobo was first introduced and the Kindle 2 was still $259): since the Kobo Wireless can sometimes be found on sale (or on clearance at a closing Borders store), it can be a good buy as a second e-reader or low-cost alternative if you find a good deal (under $99).