E-Book sales for Feb 2012 cooled a bit from the record-breaking January pace, totaling $114.9M for the month. (See the note last month regarding the new methodology used to calculate these sales figures.) 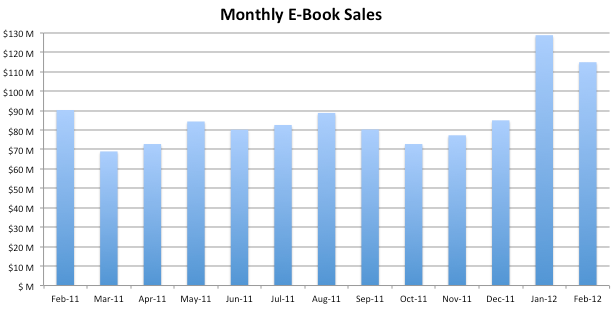 While impressive, these numbers are only a small increase from Feb 2011’s then-record-breaking $90.3M. According to the AAP, last February’s figure was artificially inflated due to a “one-off retail revenue transaction report” that “now makes that figure abnormally high.”

It appears print books had a banner month, pushing total sales to $578.3M, the second-highest month I’ve seen since I’ve been tracking these figures (Oct 2010 clocked in at $609.7M).

If those numbers are accurate, it’s the best month for mass-market paperbacks since Sep 2010, which had been in a steady decline. E-Books accounted for 19.9% of the total sales reported above, a decrease from last month, but a little above last year’s average of 19.1%.