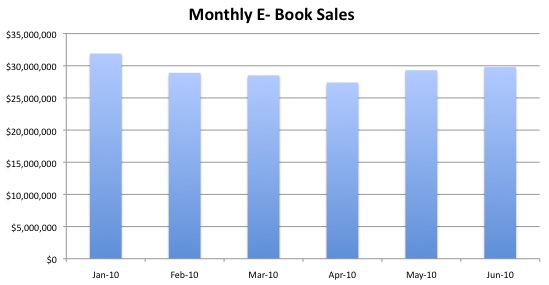 I should point out that the monthly and quarterly figures don’t seem to correlate exactly — it seems the IDPF (which releases quarterly figures) adds something to the monthly figures that come from the Association of American Publishers. Please keep in mind that e-book sales figures are only an estimate, and an incomplete one at that. They don’t get their data from e-book retailers (like Amazon, B&N, and Apple), which are notoriously secretive about their e-book sales, they get it from publishers. But they only include figures from certain large publishers, and ignore sales of e-books through smaller channels, such as small presses and independent publishers. For example, I’m just an unknown indie author, but I’ve sold over 6,000 e-book copies in the first 6 months of this year, and they aren’t counted in the numbers above. So it’s safe to say these numbers are inexact and underrepresented.

Those caveats aside, the monthly sales totals so far this year are:

And the quarterly figures given by the IDPF, with the totals of the monthly numbers above in parenthesis for comparison:

On a positive note, June sales continued to increase over May, which itself increased over the low point in April. On the down side, the strong May and June sales weren’t enough to overtake the Q1 numbers, which were mostly buoyed by huge numbers in January. There are a few possible explanations and observations I draw from this data:

To expand a bit on the last point, e-book sales have been increasing so rapidly, that the first 6 months of 2010 have already exceeded all of 2009 ($175.8M vs. $165.8M). And 2009’s sales are over triple 2008’s ($165.8M vs. $53.5M). This is the first quarter where sales have declined in the past three years, but they have bounced around a bit and then continued their upward momentum before, so I think it’s too soon to say that e-book sales have plateaued. Looking at the chart below, it looks more like Q1 2010 was abnormally high than that Q2 2010 was abnormally low. Most estimates still have e-books steadily increasing their market share, and most industry insiders expect e-books to account for 25% of book sales within the next 2-4 years. 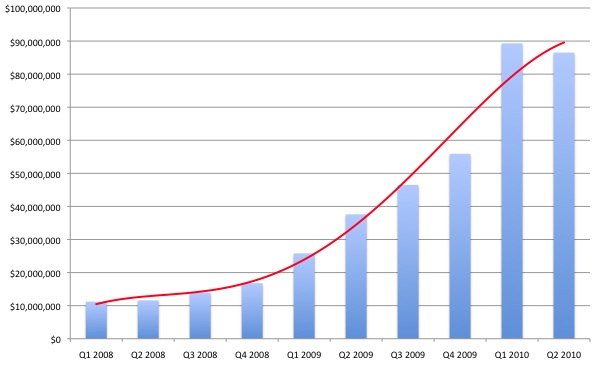 I think it’s encouraging to see June’s sales continue the upward trend from May, and hopefully April will just prove to be a one-time dip, caused by agency model pricing. One stat I’d love to get my hands on: what percentage of e-book sales are independent authors responsible for, and how quickly is that number increasing? Maybe the book sales of traditional publishers are flat, but that doesn’t mean overall e-book sales are flat as well. 😉

UPDATE: A few industry analysts confirm my explanations for the dip in Q2 sales.