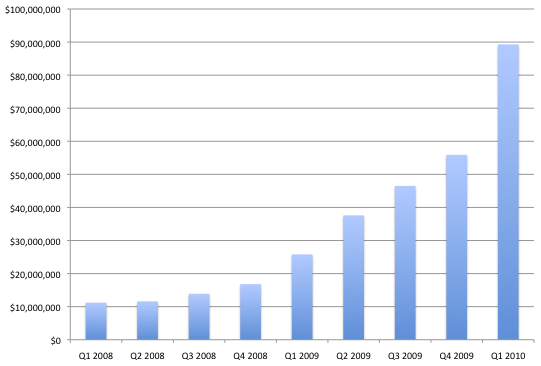 Keep in mind two things: first, that these numbers do not include sales of independent authors (like myself). True, I won’t move that bar much by myself, but with tens of thousands of authors like me, the effect could be significant. Second, these numbers do not include any sales from the Apple iBook store or through the Kindle for iPad app, since the iPad wasn’t released until April 3.

Even when comparing e-books to print books, the news is still promising. Two major publishers (Hachette and Simon & Schuster) reported that e-book sales for Q1 2010 constituted 8% of their total revenue. Keep in mind that (a) not all printed books currently make sense as e-books (children’s books, cookbooks, picture books, etc.), (b) not all books that do make sense have been released in e-book format yet, and (c) that e-books generally sell for less than printed books, so 8% of revenue would mean a higher percentage of unit sales. It is reasonable to conclude that, of books with both a printed and e-book counterpart, e-books could make up anywhere from 10 to 20% of unit sales. Amazon has already reported that their e-book sales account for about 40% of their total book sales (for titles with both versions available).

Just to keep the numbers in perspective, let’s look at overall print book sales compared to e-book sales. While it’s true that the percentage increases for e-books have been very impressive, they had started from such a small fraction of print book sales that they still paled in comparison. Well, what if I told you that, in March 2010 (the latest month data is available), total e-book sales were over 53% as much as total mass-market paperback sales. Then, what if we compare the year-over-year 251.9% increase in e-books with the 18.1% decrease in mass market sales from last year. Which would you bet on being higher next year? How about this Christmas?

Here’s the full chart (with year-over-year growth percentage over the columns): 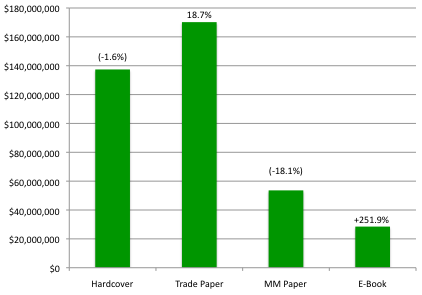 True, e-books have a ways to go before they surpass combined print sales. But comparing the rate at which those numbers are changing (e-book sales exploding while print sales stagnate or decrease), considering the proliferation of new e-book readers like the iPad, and keeping in mind that more bookstores close every day, what do you think this chart will look like next year? How about 3 or 5 years from now?