I wrote my first novel, Right Ascension, in 2000, and the sequel, Declination, was completed in 2002. While they enjoyed some early success and some sporadic pockets of sales, and received positive feedback from readers, they essentially sold about as well as most self-published books, which is to say: hardly at all. A few hundred copies over the course of several years.

Then, I learned about Amazon and their Digital Text Platform, and I published my novels to be sold through Amazon for the Kindle.

And people started buying it.

Not a ton, mind you, but some. And so I did some research. And I spent weeks learning how to perfect Kindle formatting. I spent time on Kindle boards, getting to know readers and what they wanted. I learned that the stigma against self-publishing is disappearing, just as it did for “indie” musicians and movies. In fact, people were sick of the same regurgitated tripe being spewed forth by the big publishers. Think about the three biggest hits of the past five years: Harry Potter, Dan Brown, and Twilight. Are any of those examples of great writing?

In December of 2009, I lowered my e-book prices to just 99 cents each. I debated back and forth for a while. But they’re worth more than that! I cried. But I did it, as a grand experiment, and it worked. While I had cut the price down from $5 to $1, my sales went up by a factor of 7. Cool.

Then, as I started becoming more active on various forums, and (I hope) started getting some positive buzz and word-of-mouth going, my sales more than doubled. Then doubled again. I sold more in a month than I had in the past decade. Then it happened again the next month. And, guess what? Readers didn’t care that my book wasn’t printed by a big publisher. Heck, they didn’t care if it was printed at all. They didn’t care that it wasn’t in bookstores. Because over 98% of all those sales were e-books. And my e-books look just as good — actually, better — than e-books from big publishers. In fact, mine are meticulously formatted and proofread and have a table of contents, while theirs are often error-filled scans of printed books. Mine enable text-to-speech, while theirs block the feature. Mine are not saddled with DRM (copy protection), and I offer them in multiple formats instead of tying you down to one device. And, while readers feel gouged by publishers raising prices from $9.99 to $14.99 and charging more for e-books than paperbacks, mine are just 99 cents.

Now, for the first time, I feel that there is a possibility — certainly not a certainty — but a chance of actually making a living at writing. For a long time I was told that I had a real talent for writing, and I worked hard at it, but the only option was to send query letters into the black hole of agents’ and publishers’ “slush piles,” sometimes getting a polite form rejection letter, sometimes a scrawled “NO” written in the margin of my own letter and sent back in my return envelope, usually no response at all, and never even once did anyone actually read the book they were rejecting.

So I’ve bypassed the gatekeepers, and am taking my work directly to the readers. Yes, it’s taken a ton of time, but it’s cost me very little money in the digital realm, and my books sit on Amazon’s virtual shelves next to (and even above!) Asimov and Heinlein and Vonnegut. And maybe, if I continue to work hard and hone my craft, write more novels, promote like crazy, get great editors to help ensure the books meet or exceed the quality of “traditionally-published” stuff, and get a bit of luck, I just might eke out a living at doing what I love. And that chance, remote though it still might be, did not exist two short years ago.

I’m excited. Are you? 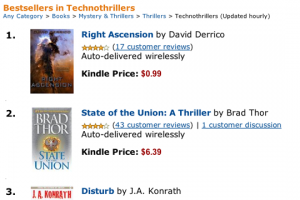 I am very excited to announce that Right Ascension has recently topped the charts as the #1 best-seller in Amazon’s Kindle Store “Technothriller” category.

The sequel, Declination, is also selling better and better, so I am gratified to see that people are enjoying my first novel enough to purchase and read the second one.

I would like to sincerely thank everyone who has read, bought, enjoyed, reviewed, or told a friend about my novels. None of this would be possible without you. Thank you!