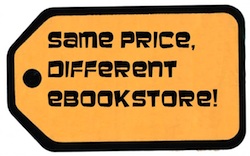 One result of the agency model

A couple of days ago, Random House became the last of the “Big 6” legacy publishers to switch over to the agency model. The agency model (described in full detail here) forces e-book retailers (like Amazon and B&N) to sell e-books at the prices that the publishers choose, with no discounting allowed. The retailers receive 30% of the purchase price.

Switching to the agency model usually results in higher e-book prices (for example, bestsellers rising from $9.99 to $12.99 or more once Amazon is no longer allowed to discount them), and should ensure that prices are the same at any e-book retailer. (On the plus side, that means there’s usually little point in shopping around for e-books; on the minus side, that means you’ll rarely find a sale or good deal, everything will be “full price.”)

Part of the reason (perhaps the main reason) Random House succumbed, 11 months later, is to get their e-books on Apple’s iBookstore, which requires an agency model contract (the timing of the announcement coming on the heels of the iPad 2 introduction can’t be a coincidence). And some Random House titles are starting to show up in the iBookstore. But, with the iBookstore struggling, was this a smart move for Random House? After all, before the switch, Random House was the only large publisher still using the retail model (the same model used for printed books), where Random House received 50% of the “list price,” which was often the same as the hardcover price, and Amazon could discount the e-book as much as they wanted without cutting into the royalty. So, instead of Amazon selling bestsellers for $9.99 and giving Random House $13 or so, now they’ll sell them for $12.99 and give Random House $9.09 (70%). (Click here for more on the cost breakdowns of e-books and printed books.)

Will iBookstore sales make up for selling fewer books and earning less on each sale through Amazon and B&N? Consider me skeptical. I thought it was more likely that the other large publishers would switch away from the agency model when their original 1-year terms end next month. Do they know what they’re doing, or is this just another example of large publishers hastening their own extinction? Feel free to share your thoughts in the comments below….