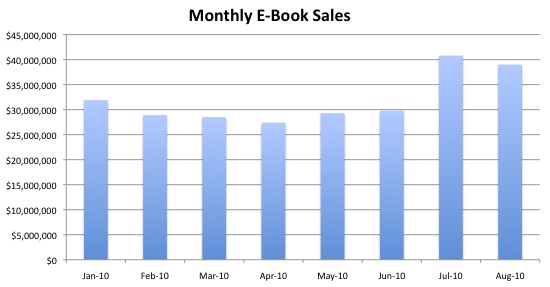 The latest e-book sales figures are in (see previous posts and analysis here), and e-book sales have pretty much continued their strong performance from July. They cooled off just slightly, totaling $39.0 million in revenue in August 2010, compared to the record $40.8M in July. That performance still puts e-book sales well above their pace from the first half of the year, and considerably above last year’s figures. For comparison, e-book sales for the first 8 months of 2010 total $263M,* compared to $165.8M for all of 2009, or $89.8M for the first 8 months of 2009 only — an increase of 193% year-to-date. August 2010’s numbers are an increase of 172.4% from August 2009.

* The AAP’s numbers don’t quite add up, as I’ve been tracking them each month (see below), and their monthly totals only add up to $255.6M. Perhaps they’re now including some late-reported sales stats or something. (Sorry, I like for math to add up precisely!)

Another interesting stat: e-book sales now constitute just over 9.0% of all consumer book sales: $263M for 2010 year-to-date, compared to $2.91 billion in trade printed book sales. This is up slightly from May of this year, when the AAP reported that e-books comprised nearly 8.5% of total consumer book sales. And it’s up dramatically from 2009, when e-books were at about 3.3%.

For review, the monthly sales figures so far this year:

After a great start in January, but little growth for the first half of the year, Q3 2010 is on pace to jump a staggering 38.4% over Q2 2010’s numbers (38.4% quarterly growth over 4 quarters would equate to 267% yearly growth). I am tempted to attribute the strong August numbers to the debut of Amazon’s Kindle 3, but it wasn’t announced until July 28 and didn’t ship until August, so I didn’t see how it could account for July’s strong numbers. But something seems to have given e-books a huge shot in the arm this summer, and the strong sales numbers have continued for a second straight month…